The Richmond Planet an Republican African American newspaper published an article faulting various branches of reserve soldiers with participating in the Wilmington, North Carolina riot on November 10, 1898. The article lists the proclamation that Waddell the “new” mayor of Wilmington gave, and pointed out the flaws in it. The article calls it treason to force the mayor and chief of police to resign. The article claims that the reason some were exiled was due to an agreement with the Red Shirts not to kill them if they left town. The jail had to be guarded all night due to Red Shirts wanting to lynch those in jail.

MORE ABOUT THE BUTCHERIES.

Scandalous Behaviour of the U. S. Naval Reserves.

Officers of the Law Exiled.---The Treasonable
Revolutionists in Possession of the City.

ANARCHY TRIUMPHANT AND THE GOVERNMENT OF NORTH CAROLONA
PARALYZED.---THE LEADERS OF THE MOB USTRPS AUTHORITY.

The estimated number of persons who were murdered at Wilmington, N. C., November 10th, 1898 has been placed at twenty-five and the number of wounded will exceed that number.
It was in no sense a race war, but rather a race massacre. To designate it as the former, both sides would be necessarily armed. The most surprising part of the whole murderous performance was part played by the Kinston Naval Reserves and the Wilmington Naval Reserves.

They participated in the lawlessness. As they are a part of the United State Navy, over which Secretary Long presides, it is expected that an investigation into their conduct will be ordered.

The other military organizations which acted as aids to the mob were the Fayetteville Rifflemen, the Clinton Guards, the Wilmington Light Infantry.

These bodies paraded the streets on the afternoon of the next day after the massacre. They carried two Coltâ€™s rapid fire guns and a one pound Hotchkiss gun. This was done for the purpose of overaweing the colored people of Wilmington. The most remarkable document was the document of the bogus mayor.

It reads as follows:

â€œThe comparatively few persons in this city who seem disposed to abuse the opportunity of carrying arms, which recent events afforded, and who are doing some very foolish talking, are hereby notified that no further turbulence or disorderly conduct will be tolerated. They are notified that a regular police will preserve order, and every peaceable citizen, black and white, will be protected in his person and property. No armed patrol except those authorized by the Chief of Police will appear on the streets. Justice is satisfied ; vengeance is cruel and accursed.
(Signed) â€œA. W. Waddell, Mayor.â€

THE PECULIARITIES OF THE DOCUMENT.

The idea of advising the white murderers not to carry firearms after he had for months been telling them to carry them is not the most ridiculous part of the absurb proclamation.

He declared that no further turbulence (murder) would be tolerated. He was fighting for the officers and secured them. Then the other fellow who had not secured them must stop the foolish talking. The last sentence is hypocritical and sounded strange in view of his past conduct.

EXCITING OFFICERS OF THE LAW

A company of Red Shirts from the Fifth Ward openly declared that they must leave or they would kill them.

In fact, it is openly admitted that they were in the hands of the band of Red Shirts and this agreement along saved their lives. They were escorted by a military guard to the train and sent from the city.

When they reached New Berne, they were not allowed to tarry and had to go North. Although one of the men is a United Statesâ€™ Commissioner, the government has as yet take no action.

THE INCREASE OF THE LAWLESSNESS.

In the meantime, the lawless had continued to increase at such a rapid rate that the bogus mayor, A. M. Waddell and the rump Board of Aldermen had to hold a secret meeting in order to check the same. The purpose was announced to]â€devise ways and means to suppress lawlessness and stop â€˜Red Shirts,â€™ â€˜Rough Ridersâ€™ and secret committees, who seemed bent upon forcing objectionable citizens to leave the cityâ€

It was planned to lynch colored men by the wholesale on the night of the 10th of November and it was was only by the most positive and energetic influence that it was frustrated.

There were eight colored men in jail who were charged with no crime and also Thomas Miller, a colored leader of prominence.

A. R. Bryant was also confined there. The only charge against him was that he was â€œa dangerous character.â€

DANGEROUS TO GO TO THE TRAINS.

The jail had to be guarded and in the morning the colored men were sent north. Hundreds of colored people left the city and Lawyer W. E. Henderson (colored) appealed for protection to the train for himself and family.

Acting Sheriff, George Z French (white) had to flee for this life. He was charged with organizing the colored people.

The colored men killed, were carried to the undertaking establishment of D. C. Evans. There were four, but many more had not been reported.

It was found out that hundreds of colored people had been run to the woods and were in need of food and shelter.

The factories, too were paralyzed, labor being unobtainable. The employers were in distress and set about getting the colored people to return. C. P. Lockey, Esq., a leading white lawyer who was nominee for judge and chairman of the County Republican Convention decided to reside in the north hereafter.

It was a veritable reign of terror that existed. In the face of all this Gov. Russell of Raleigh, North Carolina took no action and President McKinley at Washington, D. C., was silent. It was a dark day for the colored people of Wilmington. The following bit of information will be a revelation. It reads thus:

â€œOne of the principal officials in command of the forces during the conflict asserts that fully twenty-five Negroes were killed, and that the bodies were secretly hidden away. Several Negroes are said to have died of exposure in the woods since the race war.â€ 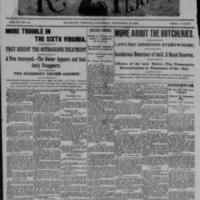