The Richmond Planet a Republican African American owned newspaper published an article that stated there was no reasonable justification for the murder of twenty-five African American in Wilmington, North Carolina on November 10, 1898. African American had agreed not to field a Republican ticket in the election and kept that agreement, the riot was caused by victory at the polls that spurred the Democrats to want more, hence the killing of unarmed African American resulted. The article shoots down the excuse that African Americans had gathered to defend Manly’s building as absurd due to the fact they were unarmed.

THE APOLOGISTS FOR NORTH CAROLINA.

That any one, white or colored, Jew or Gentile, Christian or Infidel could be found to justify the murdering of the unarmed colored men at Wilmington, N. C., after the so-called election has taken place is one of the surprises of the century.

The leaders on both sides had been in conference, and had agreed upon a mode of procedure. The colored people abided by this decision and placed no ticket in the field. The traitors to the city government, intoxicated by their success proceeded to destroy private property and take human life.

There was no excuse for it and the only plea in justification is that some other man who was not found and who was not killed had written an objectionable article and published it in his journal three months before, and therefore twenty-five people who did not write the article and twenty five more who knew nothing about it must be shot down and butchered to satisfy the passions of the band of cut-throats.

Could a plea be more absurd? Could an excuse be more preposterous? At first, an effort was made to have it appear that these colored people had gathered there for the purpose of defending the building, then this was found to be out of the question, because they were unarmed.

The suffering of the victims of this massacre will never be told. Men were shot in the head, in the body, in the limbs. Women with babes in their arms were forced to flee for their lives. Small children were helpless and in their wild rush, went ahead of their parents.

The adjoining woods were filled with the refugees. No food, no money, no shelter, they spent the night, and many were the prayers sent up to the merciful GOD.

Ah, it is a hard time we are having in this Southland of ours. As we progress, as we improve our condition, mentally, morally, and materially, our blood is made to redden the soil and our persecution multiplied.

It was a relic of the Middle Ages. It was slaughter, useless slaughter, and A. M. WADDELL, was the leader of the murderous outrage and his active supporters, participants in the crime.

We challenge a comparison of this slaughter with the atrocities of the Turks in Armenia.

It was cruel, brutal, ghastly, outlandish murder. But a reckoning day is coming bye and bye. It will not be always as it is now and we would be false to our Christian belief and hope not to realize that punishment will follow this outburst of brutal passion.

Wilmington will suffer. Her industries will be paralyzed. People of the North and West will consider every garment from its manufactories as being blood-stained. The office-seekers will spend the blood money which they have secured, but the masses, and the murders will yet live to repent of their folly. 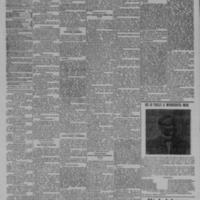