The women of Cleveland County wrote to Governor Vance in September 1863 about a fundraiser that occurred in 1862. The women performed a tableaux and raided 1000 dollars going to soldiers families of the county. The letter contains the names of men from Cleveland County fighting in the war. The money raised was donated for the familyâ€™s of these men. The letter does not specify the women who wrote the letter and was signed as a group. The third image is a close-up of the beginning of the letter.

To your excellency Z. B. Vance Governor of the state of North Carolina
To do Hospitality make known to your excellency that we [apistice] in the expenses of the above named [tabnaut] and the expenses and that most Mary Woodward was fulfilling of [prinecfied] Governor during [newarlyu] all the time of that the names of the young ladies above acting in and bearing the expenses of the dance and that for worldly approve of their [incdemten] to Rufus Haroubarger (nephew) balance of the June meeting from the dame our the relieve of the wives and families of the intelligent soldiers of their county and he humbly ask your excellency to [Ememt] or [siten] the amount that has or may be hereafter course to your hands by those [opponce] to this charitable installation if was by own companion of the is my duty bound will my the names of the citizens knowing names of the young men [apist] the above pact the in the [exense] to. 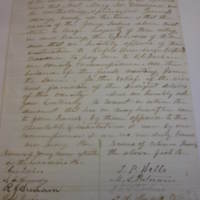 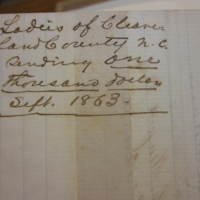 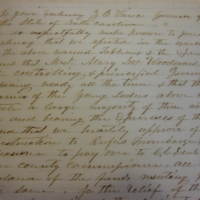