Shearer Davis Bowman, At The Precipice (2010)

Shearer Davis Bowman, At The Precipice (2010)

In his book, At The Precipice: Americans North and South During the Secession Crisis, Shearer Davis Bowman seeks to answer the question on why did the southern states decide to secede from the Union in 1861 and in response why did the northern states decide to remain loyal to the Union and not accept and fight the Confederacy. To answer these questions Bowman takes us inside the minds of many people both Northern and Southern to find out they’re views on secession and what was going on at the time of this impending crisis. Specific to North Carolina, Bowman gives views on slavery from the rich slaveholder to the yeoman farmer. He also gives accounts on a few North Carolinian’s that are for secession and some that are Unionist. Bowman also describes the impact of the election of 1860 on North Carolina and the state’s process toward secession. 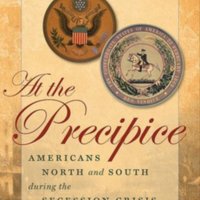