Lincoln's proclamation to the Senate in which he states that South Carolina, Georgia, Alabama, Florida, Mississippi, Louisiana, and Texas have been, and are continuing to be, opposed to the execution of the laws of the United States. In this proclamation the President called for states which were still loyal to the Union to send a total of 75,000 troops in order to reclaim the forts and property which had been seized from the Union. 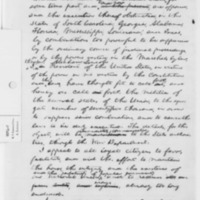