Near the Potomac River

I will now proceed to continue my regular series of letters, and as you see I will have to go back to the time we crossed the Potomac, as that is the time I left off.

Thursday, 25 â€” We waded the Potomac this morning below Shepardstown, going into Maryland. We passed through Sharpsburg, and went on to Hagerstown, where we bivouaced* for the night. Considerable regard has been displayed by the Maryland ladies toward us.

Friday, 26 â€” We are passing on toward Pensylvania, and crossed the line into it (Pa.) this evening. The day has been rainy, and marching is very disagreeable. I am unwell, but have kept up with the Regiment.

Saturday, 27 â€” Still on the march northward. We passed through Fayetville this evening, and bivouacked.

Sunday, 28 â€” We remained in bivouac all day. Although it is Sunday, yet necessity compells us to wash our clothes, etc. Indeed this looks like there is no Sunday in war.

Monday, 29 â€” Took up the line of march again this morning. We are traveling through the mountains again. We bivouaced near Cash Town on the mountain side.

Tuesday, 30â€” We have remained in bivouac all day â€” Raining. I saw brother Benick this evening. He is looking well.

Wednesday, 1â€” We moved forward this morning to attack the enemy who is in our front. Our brigade is in front and opened the fight. We found the enemy in position immediately in front of Gettysburg, Pa. We (our brigade) attacked him and after a sharp struggle broke two of his lines and drove him back. But the yankees soon brought up reinforcements on our right, and we, having no forces to cooperate with us on the flanks, after a hard contest, had to fall back. We fell back slowly some distance and awaited reinforcements. Our loss was heavy in this onset, a great many being captured. Ewells forces now came up on our left, and the balance of our Corps on our right, and the battle raged furiously along the whole line. Our forces moved steadily on, though the enemy gave back very stubbornly, but against sunset we had drove them back at all points and held the town. The yankee loss was heavy in killed wounded and prisoners, evidently heavier than ours. This days fight was a decided victory for us. But alas! it has been bought with the life-blood of many of our brave boys. Our division was permitted to pass back to the rear to night and rest. Our Regt went into the fight this morning with about 525 men, and we came out this evening with 123, and our division generally has suffered equally as much. So you can form some idea of our loss. I carried 48 into the fight and came out with 11. A ball struck me on the rump as we were falling back, but did not enter. I would give the blessed Lord all thanks for preserving me, while death reigned so near around.

Thursday, 2 â€” We rested till late this evening when we were moved round to the right, and took position on our lines, bloody work is before us again. Hard fighting has been going on to-day, but, as you see, our division was not in it. The enemy has a very strong position, and our men have failed to route them to-day.

Friday, 3 â€” We have been shelled nearly all day, and this evening the most terrific cannonading occurred that I ever heard. We had over 100 pieces of cannon engaged and the yankees, I suppose, had equally as many. The cannonading continued one hour. Our line was then ordered to move forward and charge the enemy, who were posted behind a stone fence, with their artillery on rising ground in their rear. An open field lay to their front through which we had to advance. We moved forward, exposed to a hot fire of grape shot and shells, yet we moved on. When we came in range of their small arms their fire became destructive in the extreme yet we moved on till within about 100 yards of their line, when our ranks were so thinned that we could proceed no further. So our line broke in confusion and every man got out the best he could. It must be remembered that while we were going back, we were equally exposed as when we were advancing. Godâ€™s good grace again shielded me, and I came out unhurt. Rufus was wounded in the charge, and Lieut Mull never came out I do not know whether he was killed or not. A great many, in fact most of our wounded and dead could not be gotten out. Our Regt went in this time with about 120 and came out with 40. The rest suffered equally as much. We now formed on our original line and rested for the night.

Saturday, 4 â€” Lay in our position till dark this evening, when we commenced falling back. A heavy rain fell this evening, and the roads are extremely muddy. Added to this the darkness of the night makes the most difficult and laborious marching I ever experienced. We marched al night.

Sunday, 5 â€” We halted a little while this morning, after passing through Fairfield. Then took up our march again and have been going all day. The roads are desperately bad. We are falling back toward the Potomac. Bivouaced near Waynesboro, Pa.

Monday, 6 â€” Continueing our retreat. We traveled late to night, and bivouaced near Hagerstown, Md. The march is setting very severely upon us.

Tuesday, 7 â€” We passed through Hagerstown this morning, when we filed out and took up camp. Here we have remained all day and night, and we are very glad to get to rest, for we need it very much.

Wednesday, 8 â€” We have not moved to-day. The Potomac is so full we can not cross it and hence our staying here.

Thursday, 9 â€” Remained in our place all day.

Friday, 10â€” Still in our place, fighting has been going on to the south this morning. We filed out in that direction this evening and formed in line in rear of where the fighting has been to-day. WE remained here till dark when we drew off toward the river, 1 or 3 miles.

Saturday, 11â€” We filed out to the left and formed line this morning, and are fortifying. The yankees are in our front. Skirmishing is going on. A battle is imminent. May God be with us.

Sunday, 12 â€” Still being in line, expecting the yankees. They drove back our skirmishers this evening, advancing theirs in sight of our line.

Monday, 13 â€” Skirmishing continues. Our forces drew off this evening at dark toward the Potomac. It is raining and the roads are desperately muddy. This night has been the worst marching I have done yet.

Tuesday, 14 â€” Our Division halted and formed in line faced to the rear this morning, about 1 1 â„ 2 miles from the river, to protect the rear while crossing (We are crossing on a pontoon bridge) We stacked arms and lay down to rest but we did not lie long till the yankee cavalry dashed in among us befor we knew it, completely supprising us. We had to get our arms and form as best we could while the bullets were whizzing among us. We formed after a little, and held them in check till we could cross the river. We lost a good many men in this affair. Mostly prisoners, I think. After crossing, we passed on a few miles and bivouaced.

Wednesday, 15 â€” We have been marching all day to-day, passing through Martinsburg, going toward Winchester. Took up camp to night on Bunkerâ€™s Hill, 12 miles from Winchester.

Saturday, 18 â€” We are still staying here. It looks like we are going to stay some while.

Sunday, 19 â€” This blessed Sabbath finds us still in camp I wish I could be at home to go with you to preaching. 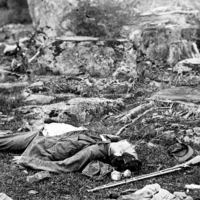