The U.S.S. Yorktown was a World War II era aircraft carrier that saw action in the Pacific Theater of World War II and during the Vietnam War. The Yorktown was also a recovery ship for the Apollo 8 space mission. The movie "Tora! Tora! Tora!" was filmed on the Yorktown. Today this carrier is docked in Charleston, South Carolina, and is a National Historic Landmark.

I was able to explore around the ship and sleep in the barracks. I never really thought much about life aboard a US Navy ship until spending a weekend on one. The sleeping arrangements were cramped to say the least. After just two nights I was ready to get back into my large bed at home. Each of the sleeping quarters had about 20-25 beds packed into a room that would barely hold a car. The beds were stacked one on top of the other and there was little room between them. When I laid down, I felt like my nose was touching the bottom of the bed on top of me. Not only were the sleeping arrangements cramped, the ship was very loud and smelled awful. My room was located directly under the landing surface of the carrier. I could only imagine how difficult it would have been trying to sleep while airplanes were landing right above you. Walking through this ship was difficult because the hallways were really tight and there were so many bars and knobs and random things around that you always felt like you were running into something.

While on the ship I was able to check out some retired World War II planes such as the Hellcat, Wildcat, Corsair, and a Japanese Zero.

Spending just a weekend on the Yorktown was enough for me to gain an appreciation for the men and women who serve in our country's military. I could not imagine what it would be like to spend months at sea on this ship. Not only were you away from family, you were constantly be under watch for an attack, your life was always at risk, and the living situation was far from ideal. Staying on this aircraft carrier sparked my interest in history and finding out what life was like for others that served in various roles of our military throughout the United States existence. 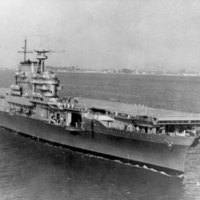