"The Life and Age of Woman. Stages of Woman's Life From the Cradle to the Grave" Kelloggs and Comstock, 1849

"The Life and Age of Woman. Stages of Woman's Life From the Cradle to the Grave" Kelloggs and Comstock, 1849

The lithograph â€œThe Life & Age of Womanâ€ portrays a womanâ€™s life in the domestic sphere. It begins with a baby girl in a cradle. As the girl grows, she plays with a doll to prepare for her future as a mother. The adolescent girl holds a rose form a suitor as she prepares to become a wife. The next stage shows the young woman in her wedding, representing her leaving her biological family for her husband. The next step shows motherhood, with a woman holding an infant. At the top of the arch depicts a woman in the prime of her life as a mother and wife. The stage down shows the toll that the life in the domestic sphere takes on a woman. In the next the woman is dressed morning cloth as she becomes a widow. After that the women is shown becoming increasingly crippled and elderly. The final stage has an elderly women knitting and waiting for death. This arch shows the ideal life for a woman in the life in the domestic sphere. It also demonstrates that as women become less useful as a unit of production and reproduction she becomes less valuable, shown here as hunched and small. The small arch at the bottom shows her family morning her after her death, her legacy from the domestic sphere morns her. The arch in this lithograph shows the stages of usefulness that women achieve thought their life and the duties associated with age in the domestic sphere. Rich or poor white womenâ€™s lives in the domestic sphere had strict roles that enforced their duties as unites of production and reproduction. 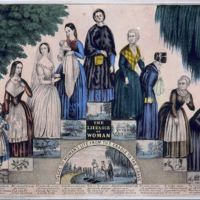 Kelloggs & Comstock, "The Life and Age of Woman. Stages of Woman's Life From the Cradle to the Grave" Kelloggs and Comstock, 1849, Civil War Era NC, accessed July 6, 2022, https://cwnc.omeka.chass.ncsu.edu/items/show/849.