Stephen R. Wise is a professor at the University of South Carolina-Beaufort and Director of the Parris Island Museum. In his book Lifeline of the Confederacy, he gives a new and unaccounted for description of the nature of blockade running and its utmost importance to the Confederacy’s ability to supply not only their armies but also ordinary citizens by bringing in cargoes that were essential to both. He states that previous works relied upon overly glorified recollections by captains' and southern newspapers' recounts of their tales. He tells of how blockade running grew into more than just a way for seafarers to get rich quick but how it became big business not only for private companies throughout the South but also the Confederate government itself. He proclaims that blockade runners were a large part of why and how the Confederacy was able to last as long as it did. Without those supplies brought in from foreign markets, the Confederacy would have collapsed much earlier. The government-employed traders had to work against private companies and their own government who refused to interfere with private shipping interests. Wise goes on to tell of how blockade runners operated and to what degree they were successful. He brings to our attention that southerners knew they did not possess the capacity for war making but fully expected to rely on Great Britain for all manner of arms and necessities of daily life. Not only did they not possess the capacity for war making but they did not wish to either, for they were so confident in their victory over the North that they believed they could buy whatever they might need with the profits from their agricultural sales to finance and supply their armies and their nation as a whole.

For both vessels and supplies, the South looked to Great Britian and, once the British realized the immense profits that could be made by running cargoes through the blockade, a large and enthusiastic trade soon opened up between Bermuda, Nassau, Havana and the confederacy.

Blockade running not only brought to the South the supplies needed to sustain the nation, but also caused a revolution in shipbuilding. By the second year of the war, the goods coming into the Confederacy were carried on fast, light-drafted, steel- and iron-hulled steamers. These vessels, designed to carry an immense amount of cargo, slipped past the Union warships at night, delivering valuable supplies to the South.

The trade also grew into a sophisticated business, carried on by both the Confederacy and private companies. Its importance to the South was tremendous. Without blockade runing, the Confederacy could not have properly armed, clothed, or fed its soldiers. As long as there were ports that steamers could utilize, the Confederacy survived; but, once the seaports were captured, the nation was destined to die. 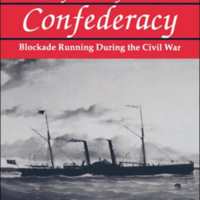