The article from the New York Times looks at how Henry Lowry is ‘robber baron’ as he continues his campaign of terror in Robeson County. Various forms of this terror are retold in the article including; ambushing a sheriff’s posse, killing prominent citizens as they rode in buggies, arriving to farms and demanding food for himself and his outfit. What can be seen in the article is that even in the Northern papers, Lowry was not widely accepted, due in part to the methods in which he operated during the late 1860’s and early 1870’s. Another aspects that can be is how Lowry’s portrayal as an American Robin Hood is used against him, even in the Northern papers. There is even a reference to the images of Spanish and Moorish pirates, and how they stashed their plunder and stole from everyone. While this is still an editorial, it is still important to note at how much this issue in North Carolina played into the bigger scale of American politics.

It was the favorite amusement of the robber barons, who made life exciting for their neighbors in the Middle Ages, to establish themselves in some convenient stronghold, and thence harry the country around. No trader could carry his goods within bowshot of the battlements without paying heavy toll, and trembling husbandmen in the vicinity were glad to purchase life at the cost of supporting, with generous contributions from their folds and granaries, this ruffianly business. The robber barons have disappeared before the march of modern progress, or line only in the discontented fancy of those ingenuous Communists, who see in every capitalist a spoiler of the poor. It is odd, therefore, to read in our own land and time of the establishment of just such a lawless despotism as once lorded it along the Rhine. LOWRY is the name of this robber baron of the period, and his stronghold is an island at the centre of an almost inaccessible swamp in Robeson County, North Carolina. There he dwell in state with his retainers, a motley crew of whites and blacks, runaway slaves of the war time, deserted soldiers of both armies, and miscellaneous outlaws of every stamp. His own color it is hard to fix with certainty, as some accounts make him a negro, while others attest, with no less positiveness, that hi is a white man.

From this secure fortress he is wont to sally forth armed to the teeth and ravage the surroundfing farms. Not a crime of any sort is committed for around, from a barn-yard theft or a highway robbery, to burglary, arson and murder, but is ascribed with almost certain justice to him and his gang. Nor he seek the cover of darkness for his evil deeds. He comes out boldly in the daylight, and makes his requisitions openly and defiantly of his submissive vasslas. Thus he will repair to one farm-house with his band, and demand breakfast, which we may well believe is speedily served him. On another he will levy for dinner. And so at the expanse of his neighbors he leads a free and jovial life, returning each evening to his island laden with spols, quite like the pictures WASHINGTON IRVING has left us, of Spanish castellan or Moorish alcalde, bearing back their plunder from the ravaged Vega.

Of course the authroiries have heard of all this, and they sometimes make feeble efforts to check his career. But he never hesitates to give them battle, and so far with invariable success. About a week ago he “ambushed” the Sheriff’s posse that had arrested his wife, and dispearsed them with a loss of three willed and many wounded. With one of the enemy this chivalric cut-throat had a regular duel on the railroad track, each loading and firing repeatedly without effect. Last Monday this exploit was repeated, with the result of killing two prominent citizens and wounding another, as they were riding along the public highway in a buggy. These events, we learn, have plunged Robeson County into a state of terror, and the Sheriff is out with a posse of one hundred and fifty men, who have thus far been unable so much to find the outlaws.

We trust that their failure will not be permanent. Such a state of things, however picturesque, is simply disgraceful to any civilized community. If the power of Robeson County is not sufficient to put down these assassins, the aid of the State should be invoked at once. These marauders have been defying the law, for years, and it seems strange that no determined action has before this been taken for their suppression. Such unpleasant “romances” of crime can scarcely be tolerated in America today. 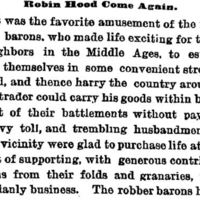