Petitioned under the first clause, having been a Post Master at "Butler" in Rutherford County

Jonathan Beattie Carpenter was born to Cynthia and James Hines Carpenter in 1838 in Rutherford County, North Carolina. James Carpenter was a successful merchant, owning $1,000 in property in 1850, which grew to over $7,000 by 1860. And yet, the Carpenter family owned no slaves. From the beginning, Jonathan Beattie Carpenter, or J. B. Carpenter as he signed his name, was the product of his environment. Slaves were present in Rutherford County, but even many of the wealthiest in the county did not own them. It is unknown why most of Rutherford County, and in fact much of this area of North and South Carolina, decided to forgo a paid laborer, but what is know is that J. B. Carpenter continued to follow the overall feelings of the county by supporting the Confederate States of America, and then becoming a Republican after the Civil War, and was the founder and co-editor of a â€œconservativeâ€ newspaper, The Rutherford Star.

Within two years of the end of the war, J. B. Carpenter appears to have made a complete political turn around. In 1866 he began a newspaper with Robert Logan, the son of George W. Logan who was elected Superior Court Judge in the 9th Judicial District in 1868 following the passage of the North Carolina Radical Republican Constitution. J. B. Carpenter and Robert Logan opened the first newspaper to be printed in Rutherford County since 1861. In their first edition, they described their newspaper as being conservative, but editorials soon show support of President Johnsonâ€™s plan for Reconstruction for the improvement of the Union. In the Prospectus, printed from the beginning, Carpenter and Logan expressed their

â€¦desire to make The Star a welcome visitor to all those who feel an interest in the prosperity and welfare of our country as a whole, and the perpetuity of our institutions, as handed down to us by our noble ancestry, a Federal Republican Government. Our people have but lately emerged from a gigantic civil war, waged by and between Sections of a once glorious Unionâ€¦ We shall be governed by principles and not men, for according to our honest conviction, the present condition of our country is owing to the abandonment of principles, we mean the abandonment of those fundamental principles upon which the Government of the United States was reared.â€¦Politics, we are True Conservatives, believing neither in the Fire Eaters of the South, nor the Radical of the North, but in the Constitution, the Union, and enforcement of all Constitutional laws, whether State or Federal, and a ready and willing obedience to the sameâ€¦

This shows that, even if not admitting to be so, the founders of The Rutherford Star did lean Republican as the country emerged from the â€œgigantic civil war.â€

J. B. Carpenterâ€™s preference for the Republican Party was further shown during the growth of the Ku Klux Klan. By 1869, the Klan had grown in nearby Cleveland County, as well as in Spartenburg County, South Carolina. But in Rutherford County, J. B. Carpenter and the Logans were not the only Republicans. It was feared in 1871 that Rutherford County would suffer more from Klan violence because their Republican majority was so large. Aside from publishing The Star, J. B. Carpenter also turned to the state and federal government for assistance in fighting the KKK. He wrote to the Governor and the President for assistance, and traveled to Washington, DC to testify against the KKK. In fact, leaders of the Cleveland County KKK expressed a desire to kill J. B. Carpenter and others in order to continue the KKK.

From birth, it is apparent that J. B. Carpenter followed the general beliefs of those in his county. His family did not own slaves, but few in the area did no matter their wealth. J. B. Carpenterâ€™s voting record while serving in the North Carolina House of Commons often followed that of the majority, including supporting the war effort to the bitter end. By 1866 he was beginning to lean toward the Republican Party, supporting President Johnsonâ€™s plan for Reconstruction in his newspaper, and even printing an editorial encouraging the education of African Americans. A statement by a neighbor shows that J. B. Carpenter and the Logan family were not alone in their Republican preferences. In 1869, it was feared that the strong Republican majority would lead to an increase in Ku Klux Klan violence in Rutherford County. But J. B. Carpenter appears to have become a leader in the fight against the KKK. Carpenter was a strong leader. From serving the Confederate States of America to defending the Union after the war, he helped lead a secluded section of the country through the shadows of rebellion to the reconstruction of the Union.

The petition of J. B. Carpenter a resident of the County and State aforesaid, aged twenty seven years, last June and by occupation a Farmer represents unto your Excellency that in the Beginning of the late rebellion he was an original Union Man and during the Continuance of the same his political opinions underwent no change. He entered the service of the Confederate States as a volunteer in June 1861 and was relieved from the same in October following. [H]e was elected to the Legislature of No Ca in 1862 and served for two years as a member of that body, he purchased and sold to the soldiers articles of necessity frequently during the continuance of the rebellion. [H]is general conduct was quiet and orderly. Your petitioner was Post Master at â€œButlerâ€ in said County under the so called Confederate States.

The offense chargeable against your petitioner is contained in the first clause of the amnesty Proclamation of 29th May 1865.

The petition has taken oath of amnesty as prescribed in the Presidentâ€™s Proclamation of 29th May 1865 and intends to observe the same;

Your Petition desires to be pardoned and to be placed on a footing with loyal citizens of the United States, as in duty bound will every pray. Sworn to and subscribed this 15th Augt. 1865.

It is also important to note that I have gone by the spelling of Jonathan Beattie Carpenter in James Hines Carpenters will. It is spelled differently in in Carpenter appear to be the same. 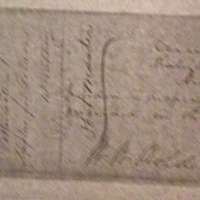 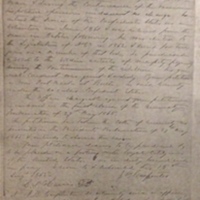