Bryan Grimes was the last Confederate officer in the Army of Northern Virginia to be appointed to the rank of Major General by Robert E. Lee. A native of North Carolina, Grimes fought on several Confederate campaigns including the Peninsula, Overland, and Valley Campaign. General Bryan Grimes used this railway ticket on his travels through the Confederate South. He used this particular ticket in a journey beginning in High Point, traveling through Raleigh and Weldon, and ending in Tarborough. The Quartermaster Department of the Confederate States of America created such tickets for the express purpose of providing travel documentation for Confederate citizens traveling by way of rail. 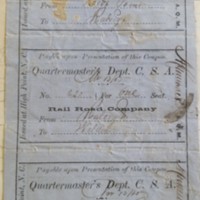