In this newspaper article, which was used by Governor Zebulon Vance as a political weapon during the 1864 North Carolina gubernatorial campaign, many issues are addressed with regard to defining Confederate loyalty. In an attempt to slander W. W. Holden's character, John D. Hyman, the editor of Governor Vance's The Daily Conservative newspaper was clearly responding to the peace rallies of his opponent, Holden, by labeling him as disloyal agitator who would unlawfully circumvent Confederate authority and withdraw from the Civil War.

In contrast to the perfidious character of Holden, The Daily Conservative exhibits Governor Vance as a the model image of a loyal and devoted North Carolinian Confederate. Using evidence from a correspondence between Governor Vance and President Davis, which was dated December 30, 1863, the author of this article claims that Vance supported peace negotiations; however, after President Davis denied allowing the call for negotiations, Vance respected the chain of command and continued support for the war. In conclusion, The Daily Conservative suggested that the best peacemakers for the Confederacy would be found in the Confederate army and in the decisions of the President and Senate, not the exacted will of any State Governor.

FOR GOVERNOR
Z. B. VANCE,
OF BUNCOMBE

The Conservative Ticket for Wake County!

TO PRINTERS.
TWO GOOD COMPOSITORS CAN FIND PERMAN
-ent employment by immediately applying to this office.
May 24, 1863


What Could Holden Do For Peace?

This question is frequently asked. Were he elected Governor, what could he do that Gov. VANCE has not done? Could he do as much as Gov. VANCE has done? We answer, no. Gov. VANCE is looked upon by Congress and the treaty-making power, as eminently patriotic, as having the best interests of the Confederacy at heart as thoroughly loyal and devoted to the great cause of independence. Any thing, therefore, he might offer by way of suggestion, or advice, would have far more weight than anything Mr. HOLDEN could say or do. We do not wish to be understood as endorsing either the administration in all its acts, or as sanctioning the legislation of Congress in every particular. We think both the Administration and the Congress have erred in many respects. But we will not charge Congress with downright corruption as the Progress has done. We give both the President and Congress at least credit for honest intentions in the discharge of public duties.
But what we set out to say was that the Governor of a State can do nothing, in his official character, towards negotiating a treaty of peace. All he can do would be to loan the weight of his moral influence with those who see entrusted with the treaty making power – which are the President and the Senate. We claim that Gov. VANCE, as is shown in the correspondence between himself and President DAVIS (which Mr. HOLDEN refuses to publish,) has done all that mortal man could do, occupying the position he does, in the direction of peace. We do not believe that Mr. HOLDEN would have any weight or influence whatever with the treaty-making power, because he is regarded as untrue to the great cause of nationality and independence [that] all good and true men have so much at heart.
If any body were to ask us our real opinions as to who were the best peace men to the Confederacy, we would unhesitatingly answer ROBERT E. LEE and JOSEPH E. JOHNSTON. We think they are doing more to bring about a “just, honorable, and lasting peace,” than all the peace resolutions that could be written on paper between now and doomsday. At the same time we advocate negotiations after signal victories. And, if the news we publish this morning is true, as we believe it is, we think the time has now arrived. 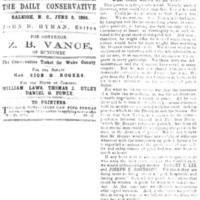