This article from Governor Zebulon Vance's July 13th edition of his political newspaper, The Weekly Conservative, is the first of many which were concerned with the voter manipulation tactics used throughout the 1864 North Carolina gubernatorial elections. In this exhibit, it is noteworthy that Governor Vance discovered his opponent, William Holden's discreet suggestion that Holden's supporters should roll up their ballots before placing them into the ballot box in order to prevent the members of the voter's community from discovering their political allegiance. This insinuates that the voters may have been intimidated by members in their communities to support Vance in the coming election for fear of social, economic, or physical dangers that could follow a vote for Holden. This situation is also notable as during the coming weeks Governor Vance attempted to implement methods to make his ballots distinct from Holden's ballots, thereby revealing any voters who would have supported Holden during the election.

FOR GOVERNOR :
Z. B. VANCE
OF BUNCOMBE

The Conservative Ticket for Wake County !

A friend has just handed us a “N. C. Standard –Extra” dated Sunday, July 10th. The circular commences “Fellow citizens,” and the whole sum and substance is, that Holden’s friends should vote with a folded ticket – that is, a ticket “rolled up,” so that no one can see whom they are voting for. – As this advice will no doubt be taken by those who intend voting for the secession candidate, the friends of Gov. Vance can know how to spot a Holdenite when he goes to the polls, as he will approach the ballot box with a “rolled up” ticket. No man is worthy of the name of a freeman, who is afraid for his neighbors and the public to know how he votes. – The true, manly, independent way to vote is with an open, erect countenance, and with an open ticket, so that any one, who may wish to know how you vate, may see and judge for himself. As poor an opinion as we have of any one who would vote for Holden, we can but respect him if he goes to the polls like a free man, and votes an open ticket.

This secret circular of Holden is no doubt intended for the army, whither emissaries have no doubt been sent to give it circulation. Let the friends of Gov. Vance be on the lookout. 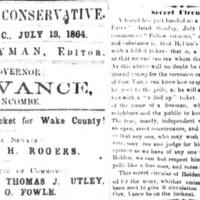