To clear up any general confusion with the Reconstruction acts, The Old North State elaborated on registration benefits. As part of one of the many requirements to rejoin the Union States, a Southern state had to rewrite their constitution to fit appropriately with the North. However, there had to be an overwhelming vote among eligible men within the state. So, men vowed that they were part of and lived in the state they voted for, and essentially established their allegiance to the state. If the votes were in favor for a reworking of the constitution, the new legislation would be submitted to Congress. If it was approved at that level, the corresponding state would again have representation. The transcribed text shows an elaboration on the process that granted a state its representation. For the full text, see the PDF file.

If the convention shall vote that it is the wish of the people to frame a constitution they shall proceed to frame the instrument which is then to be submitted to the registered voters for their adoption, the original registering officers still to preside and make returns. The constitution, if adopted, is then to be submitted to Congress for approval; and if Congress pronounces it conformable to the provisions of the reconstruction act then, and not till then, the State shall be entitled to representation. Then the process of reconstruction will be complete. The whole process is under the full exclusion of any possible interference by any other authority whatever, whether of the State governments declared to be provisional or any other. 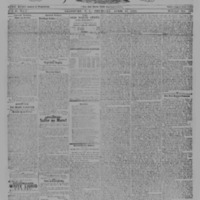