The presidential election of 1860 featured a four-way race between John C. Breckinridge, the southern Democratic nominee from Kentucky running on a federal slave code platform; Stephen A. Douglas, the northern Democratic nominee from Illinois running on a popular sovereignty platform; John Bell, the Constitutional Union nominee from Tennessee on a "constitutional" platform; and Abraham Lincoln, the Republican nominee from Illinois on a free soil platform. On November 6, 1860, North Carolinian voters chosen Breckinridge in the presidential election. Breckinridge won 48,533 votes compared to 44,039 for Bell and 2,690 for Douglas. North Carolina did not include Lincoln on the ballot because of the antislavery policies of his party. Despite the opposition of southern states like North Carolina, Lincoln won the election by securing the electoral votes of all the northern states. Lincoln's election, and specifically the perceived threat he posed to southern states' abilities to protect slavery, prompted lower South states, starting with South Carolina, to secede from the Union. In the months following Lincoln's election, most white North Carolinians favored some kind of compromise with the North. This was evident in voters' refusal to convene a convention to consider secession. (NCHP) 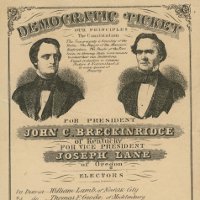