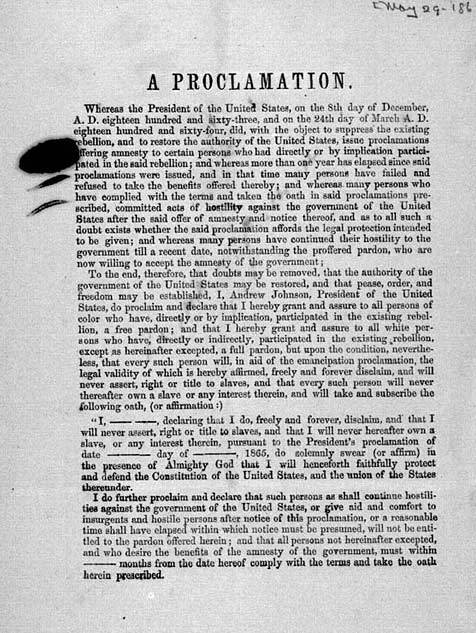 Andrew Johnson's "Proclamation of Amnesty and Reconstruction," May 29, 1865

The designs for amnesty and pardon under Abraham Lincoln were intended to encourage desertion from the Confederacy with a promise of leniency. (Dorris 1953, 256) Lincoln desired to hasten the end of hostilities and quickly reestablish the fraternity of the parted Union. After asking Lincoln what to do with the defeated rebel armies in March 1865, General William Tecumseh Sherman remarked that, â€œall [Lincoln] wanted of us was to defeat the opposing armies, and to get the men composing the Confederate armies back to their homes at work on their farms and in their shops.â€ (Dorris 1953, 89) Additionally, the Secretary of the Navy remarked after Lincolnâ€™s last cabinet meeting that Lincoln â€œwas particularly desirous to avoid . . . any vindictiveness of punishment.â€ (Dorris 1953, 92) Other members of Lincolnâ€™s party were not so forgiving. Many felt that Lincolnâ€™s policies and desires were too soft and wished to punish former Confederates more harshly. They feared that former Confederates, returned to power, would not accept the fruits of Union victory, namely emancipation, and would harass black and white former Unionists in the South. To this extent, The New York Herald on April 16, 1865, estimated that Andrew Johnsonâ€™s policy towards former Confederates would be â€œmore tinctured with the inflexible justice of Andrew Jackson than with the prevailing tenderness of Abraham Lincoln.â€(Dorris 1953, 94)

Johnson asserted early on in the war that he wished to harshly punish the leaders of Confederacy. (Dorris 1953, 95) Upon ascending into the executive, Johnson stuck to this ideal, stating the day after being sworn in that â€œâ€™Treason must be made infamous, and traitors must be impoverished.â€ (Dorris 1953, 98) Although many fellow Republicans encouraged Johnson, the advice of Attorney General James Speed softened his hard-line approach. Speed stressed Lincolnâ€™s preference for leniency and advised that Johnson keep with Lincolnâ€™s plan, but widen the cases for exclusion. As Lincoln had planned to grant amnesty to cause an end to the rebellion, Speed felt that Johnsonâ€™s amnesty must serve to â€œrestore order and reorganize society.â€ Speed advised â€œMercy must be largely extended. Some of the great leaders and offenders only must be made to feel the extreme rigor of the law,â€¦not in revenge, but to put the seal of infamy upon their conduct.â€ (Dorris 1953, 110) Speed admonished Johnson to divert from his vindictive plans and find common ground; his arrangement of amnesty should not be designed to â€œpunishâ€ Confederates, but rather to make them endure an arduous process to be readmitted back into the Union and serve as an example to others.

Thus, on May 29, 1865, President Andrew Johnson issued his Proclamation of Amnesty and Reconstruction, which laid out provisions governing the restoration of citizenship and rights to former rebels. The majority of former Confederates could receive pardon for their participation in the rebellion by taking an oath swearing allegiance to the United States of America. However, within the Proclamation, Johnson excluded fourteen â€œclassesâ€ of former Confederates (eight more than Lincoln), who could not gain amnesty simply by taking the oath. Among these classes, three applied directly to members of the Confederate military. The third exception excluded â€œAll who shall have been military or naval officers of said pretended confederate government above the rank of colonel in the army or lieutenant in the navy.â€ The fifth class excluded all those who had left the United States military to serve in the rebellion. And the eighth class of those exempt from amnesty excluded â€œAll military and naval officers in the rebel service, who were educated by the government in the Military Academy at West Point or in the United States Naval Academy.â€ These provisions essentially excluded all high-ranking military officers from the benefit of gaining amnesty by simply taking an oath due to their elevated position within the Army or Navy. However, the Proclamation stated that â€œspecial application may be made to the President for pardon by any person belonging to the excepted classes; and such clemency will be liberally extended as may be consistent with the facts of the case and the peace and dignity of the United States.â€(Item 13)

Two years later, on September 7, 1867, Johnson, desiring to hasten Reconstruction, narrowed the excepted classes to three, one of which being â€œall who held . . . a military rank or title above the grade of brigadier general, or the naval rank or title above that of captain.â€ Johnson extended another proclamation less than a year later on July 4, 1868, granting amnesty to all former Confederates, excluding approximately three hundred, who were â€œunder presentment or indictment in any court of the United States upon a charge of treason or other felony.â€ (Koontz 1996, vii) He later granted a final pardon to all former Confederates on December 25, 1868, hoping that his actions would â€œsecure permanent peace, order, and prosperity throughout the land, and to renew and fully restore confidence and fraternal feeling among the whole people and their respect and attachment to the National Government.â€(Dorris 1960, 28)

It was under these proclamations that, from May 1865 to December 1868, former Confederates flooded the office of Andrew Johnson with thousands of amnesty requests, with the numbers eventually tapering off as the exemptions narrowed. Each request for amnesty included a signed copy of the oath certifying the individualâ€™s compliance, as well as a personally-written request and a third party endorsement, generally by the governor of that personâ€™s state. (Dorris 1960, 23) The personally written requests generally followed the same sequence: the individual introduced himself and his place of residence and often proclaimed his age. He then described his actions (and/or sentiments) before secession, his conduct during the war, the clause under which he was exempted, and whether or not he had any property confiscated from him. (Dorris 1953, 191) The petitions ranged from brief requests for amnesty to â€œlong and well-prepared defensesâ€ of their conduct. (Dorris 1960, 23)

Petitioners were â€œanxiousâ€ to have their amnesty requests granted and their rights and privileges as citizens of the United States resumed. Their exemption from amnesty precluded them from such activities as the â€œtransfer of titles or propertiesâ€ and the obtainment of copyrights and patents, making business very difficult. Some were even tentative to marry. Until these individuals were pardoned, they lacked civil rights and faced the prospect of having their property confiscated. Above all, they lacked political rights, and thus could not take part in the discourse involving Reconstruction, and were unable to participate in the future of the South. Thus, asking for pardon was the â€œsensible thing for these people to do.â€(Dorris 1960, 23)

Although few needed persuasion, North Carolina Governor William Holden encouraged petitions for amnesty, explaining that they would â€œbe protected in their persons and property, and encouraged in their exertion to improve their condition.â€ (Dorris 1953, 189) Johnson tasked Holden with overseeing the administration of amnesty petitions from his state.. (Dorris 1953, 188) As Johnsonâ€™s proxy in the state of North Carolina, Holdenâ€™s authority to sign off on and forward pardons linked amnesty to Johnsonâ€™s plan of Reconstruction. (Dorris 1960, 22) Holden remarked that he was â€œthe medium through which these applications went to the President, and my duty was to mark them Granted, Postponed, or Rejected.â€ (Dorris 1953, 192)