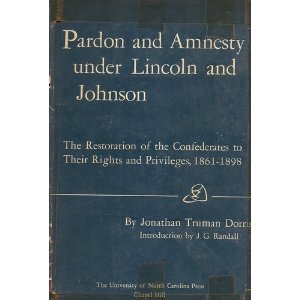 Jonathon Dorris's Pardon and Amnesty under Lincoln and Johnson. The most comprehensive scholarship on Presidential amnesty during and after the Civil War.

How does a nation, recently torn by civil war, piece itself back together? How does it work to reincorporate its members who rebelled against the government? In what manner do these men seek forgiveness, and what measures does the nation go through to ensure the renewed loyalty of its strayed citizens? The United States of America, following the end of the Civil War in 1865, faced the cumbersome and controversial task of readmitting former Confederates into the Union and restoring the bonds of brotherhood throughout the nation with the institution of Presidential amnesty and pardon.

Despite the significance of this endeavor, there has been relatively little scholarship written about Confederate amnesty requests. To be sure, the fact that certain classes of former Confederates had to petition for amnesty and pardon following the cessation of hostilities is mentioned in a multitude of Civil War research, but this fact is often glossed over and is generally taken for granted. Perhaps this is due to the fact that President Johnson ultimately granted all Confederates amnesty by the end of 1868 regardless of petition or position, thereby making it a less than contentious issue for scholars in contrast to other topics of Reconstruction. (Koontz 1996, vii) Additionally, Gordon B. Mckinney points out that Civil War historians generally avoid studying the content of amnesty proclamations themselves because the petitioners often wrote “under duress in a situation where accuracy was not necessarily a virtue.” (McKinney 2005, 8) One historian, however, has offered an exhaustive approach to the pardon and extension of amnesty to former Confederates. John Truman Dorris’s Pardon and Amnesty Under Lincoln and Johnson (1953) presents an in depth and conclusive overview of the topic and remains the only work of this nature in the breadth of Civil War studies. Other micro studies include Bradley R. Clampitt’s study of amnesty in Texas and McKinney’s scholarship on amnesty in western North Carolina and amnesty and Confederate women. (Clampitt 2006; McKinney 2005)

The approaches, viewpoints, and intentions of these works vary. McKinney’s discussion of Western North Carolina employs amnesty requests in an effort to glean the “layers of loyalty to the Confederacy” that existed in that region. (McKinney 2005, 20) His work concerning southern women analyzes amnesty requests throughout the South and concludes that women requested amnesty due to their fear of losing property. (Clampitt 2012, 256) Clampitt’s scholarship on Texas highlights the fact that, in that state, amnesty requests were granted at differing rates depending on the petitioner’s class.(Clampitt 2006) And finally, Dorris’s work concerns itself with the formation , implementation, and results of presidential pardon and amnesty under both Lincoln and Johnson throughout the entire South. His research includes discussion of the legal and political implications of amnesty and pardon, the differing doctrines under both presidents, and various case studies of certain petitioning classes and individuals. (Dorris 1953)

Among these works, only Dorris and Clampitt devote considerable attention to amnesty requests from former Confederate officers. Clampitt observes that former Confederate officers’ requests were initially approved at a much lower rate than the other classes, concluding that Johnson found high ranking military service to be “less forgivable than others.” (Clampitt 2006, 256) Dorris devotes a chapter to the discussion of amnesty in regards to former Confederate military officers, and his approach to the topic comes in the form of a narrative, describing the background of various former Confederate officers from different states, briefs excerpts of their requests, and (generally) the judgment of their pleas for amnesty. (Dorris 1953) As illustrative and informative as both approaches are, they tend to view the amnesty requests through the eyes of Johnson and other politicians in Washington, discussing the political role of amnesty in the overall application and conduct of Reconstruction.

In this manner, they tend to not focus on how former Confederate officers justified their petitions for pardon. In doing so, these approaches dilute the fact that these individuals were in fact the violent arm of the Confederacy, tasked with the employment of aggression and blood-letting to further the Confederacy’s cause. In many ways, they place their discourse in line with the other classes of petitioners and do little to address the fact that soldiers had to work to justify their actions in a different manner than those not directly involved in the violence; they had to explain why they, as men who were intended to order the death of Union soldiers, deserved to be granted pardon.

This research endeavors to uncover the manner in which Confederate military officers sought to justify their application for amnesty. By analyzing the amnesty letters of officers from North Carolina, it will reveal that many of the officers stressed their “soldierly duty” to their state, painting themselves as men who inherited the burden of a war caused by secession. To this extent, they portrayed themselves as victims of politics and heritage, deserving of amnesty due to the fact that they were divorced from the political discourse and simply discharged their soldierly duties ethically as requested by their state. These justifications and rationalizations were used in an attempt to convince Johnson that they would pose no threat to the reforming of the Union.