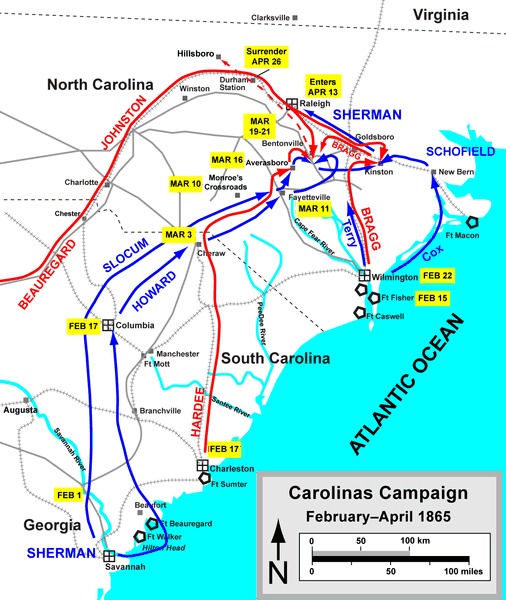 In the beginning months of 1865, General William T. Sherman began his Carolinas Campaign in North Carolina. Sherman was infamous for causing havoc throughout his March to the Sea during the Civil War, and he did not stray from such infamy during this campaign in North and South Carolina. His end goal was to destroy morale in the Southern states, but for all of his forces to convene in Goldsboro, North Carolina. Sherman had intended for he, General Schofield, and General Terry to meet in the railroad junction of Goldsboro. This would prove to be an important task in assuring rest and restocking of the Union forces in the South. Goldsboro was the ideal place for this to be done. It was home to the Wilmington and Weldon Railroad, which supplied General Lee's Confederates forces in Northern Virginia. With Sherman taking over Goldsboro in March, 1865 he essentially cut off supply lines to the Confederate forces. With all three generals occupying Goldsboro for March and April, an estimated number that varies between 90,000 and 120,000 troops resided within the city of Goldsboro.

Sherman's troops were famous for pillaging and destroying cities throughout the South, and forcing occupants to comply with their need willingly or unwillingly. Sherman's "bummers" were primarily responsible for such destruction. They would enter into homes and take anything that would be valuable to the progression of the Union forces; whether it is supplies (food, water, etc.), or valuables (jewelry, clothing, silver, gold, etc.). Sherman's forces encountered heavy resistance from citizens of the South in Georgia and South Carolina during their campaign, and expected a different encounter upon reaching the state line of North Carolina. North Carolina was one of the last states to secede from Union at the beginning of the Civil War, and the Union forces were aware of Union sympathies throughout the state. While much of this sympathy came from the western part of the state, there could be Union sympathists found in the eastern part as well.

While most historiography written on Sherman's Carolinas Campaign is about the period in which he exited Georgia and the march through South Carolina, little has been written on his march through the eastern part of North Carolina. Outside of the significant battles of Bentonville and Averasboro, there is not much said on Sherman's occupation in Goldsboro or the time before the Confederate surrender in April of 1865. Most historians argue that Sherman demoralized morale throughout the South, and particularly while marching through the Carolinas. Historian John Barrett discusses in his book, Sherman's March Through the Carolinas, that the Federal march north from Savannah brought the citizens of the Carolinas to "stern realities of the war." (Barrett 1956, 280) He argued that the treatment of the citizens in the Carolinas destroyed morale and the will to resist Union forces as they continued their march onward. This was the main strategy for Sherman and his forces. He wanted to essentially make those on the homefront "lay down" in front of him, giving little resistance, and let him continue on his way to what seemed to be inevitable victory. Other historians believed that the seemingly demoralizing effect of Sherman's march actually strengthened the Confederate pride in the Carolinas. Jacqueline Glass-Campbell argued in her book, When Sherman Marched North from the Sea, that Sherman's march actually added to the Confederate pride in the South. She argues that on the homefront women especially were resistant to Union forces entering homes and pillaging their supplies and valuables. (Campbell 2003, 6) Women were practically the only defense on the homefront, since most of the men in the South were away fighting. They were left to protect their homes and the property the family owned. When soldiers from the Union forces came knocking on their door, they were often resistant in complying with the soldiers demands. Later in this exhibit we will discuss how Confederate women in Goldsboro resisted, or attempted to resist Union demands and what the effects were because of it.

This exhibit seeks to portray how Sherman took a seemingly different approach with Goldsboro. He and his generals seemed to be willing to establish a working compact with the occupants of Goldsboro. This can be shown by a security perimeter being set up throughout Goldsboro by General Schofield. They wanted to protect the city of Goldsboro and its citizens from the impact of bummers in the city. Was Schofield's security enough to prevent bummers from invading the city and keep a peace throughout the city while Sherman occupied it? While the Union was occupying Goldsboro, were the citizens compliant? Union soldiers were expecting more support in the state of North Carolina, but did they receive it when the 120,000 soldiers all entered a single city at one time? If they were not compliant, where did tension occur and why did it occur. This exhibit seeks to add to that argument that while Schofield's security did protect much of the city, those in the outskirts of the town were left to fend for themselves. They were at the full mercy of the bummers and the Union forces, much like those citizens in Georgia and South Carolina. During the occupation of Goldsboro and the massive Union force, what was the effect of the occupation on citizens? As stated earlier and argued by Barrett, Sherman sought to destroy morale in the South. In Goldsboro, it seemed that Sherman and Schofield were more lenient towards the citizens within the city than outside of the city. What measures did citizens take to protect themselves and what were the repercussions if any on the unwilling citizens to comply with Sherman. By the conclusion of this exhibit the evidence will suggest that as you get further out from the protection of Schofield and his cavalry in Goldsboro (the city), that there is more tension outside of Goldsboro than inside based on the security measures taken by the Union forces for Goldsboro. The primary accounts from individuals within the city and outside of the city will attest to this hypothesis about Sherman's forces in Goldsboro. The inhabitants outside of the city of Goldsboro were much more resistant to comply with Sherman's demands, whereas the citizens within Goldsboro seemed to be more willing to comply with the demands of the Union army. The exhibit will argue that citizens in the city were treated better, and they had to deal with a large number of Union soldier occupation, therefore almost making it necessary for compliance between the citizens of the city and the soldiers.

This exhibit seeks to analyze first hand accounts from both citizens of the city of Goldsboro, and the outskirts of the city. Through their accounts of their interactions with Sherman and his soldiers, the exhibit will add to the historiography written on Sherman and his treatment of citizens during his occupations in cities. It will discuss the background of Sherman's Carolinas Campaign and what Union soldiers expectations were upon entering North Carolina, specifically in and around Goldsboro. Through these citizen accounts the reader will be able to draw a conclusion on whether or not Sherman was successful in his attempt to seemingly "take it easy" on the city of Goldsboro and the surrounding countryside.