Upon arrival in North Carolina, Sherman was marching straight toward his main objective there: Goldsboro. He had plans to meet both Schofield and Terry there to form an enormous army in order to replenish supplies and give much needed rest to the soldiers who had been fighting for months in the South. Schofields arrives in Goldsboro just days before Sherman's arrival and is given orders to set up a security perimeter around the city for protection against the "bummers" of the army. Schofield was met by Mayor Privett of Goldsboro on the outskirts of town to discuss terms of surrender for the city. Privett understood that Goldsboro would be at the mercy of the Union forces but asked that the city not be burned down and that citizens (mainly women and children) would be cared for and protected. This was seemingly met by Schofield's cavalry of protection that was set up around the town. The protection was offered only if citizens were compliant with the Union tasks that were done within the city. Cornelia Phillips Spencer wrote about the Schofield and his entrance of Goldsboro and the treatment of citizens by his soldiers. In her entry she described their conduct as "conciliatory" and that "no plundering was allowed by him." (Item 729) Schofield fulfilled his duty and kept his word to the citizens in the city of Goldsboro and offered them protection from the infamous pillaging army. Schofield was generous to the occupants of the city and offered protection to any individual who wished for it. Citizens would present requests to the Union forces in the provost marshal office and a guard would be sent to an individual household. Along with that a constant patrol of the town was set up by Schofield to protect citizens and property within the city limits. It looked to be a peaceful transition from Confederate city to Union occupation, until Sherman arrives days later.

Sherman's arrival into the city is described well by Spencer, and is craftily articulated to portray a visual of how Sherman was viewed by many of the Goldsboro citizens. She writes of Sherman's entrance stating that: "General Sherman's army made its grand appearance, heralded by the columns of smoke which rose from burning farmhouses on the south side of the Neuse." (Item 729) The army continued to pour into the city for over one days time and almost every square inch of the city was occupied by one of the 100,000 plus troops resting in Goldsboro. The sight of seeing 120,000 soldiers from the opposing army was an intimidating spectacle to witness for many citizens. In her diary Elizabeth Collier discussed the excitement, or frenzy, that was happening around her and her family in the small village of Everritsville, just south of Goldsboro before Sherman and his army had even arrived: "Everybody is in the wildest state of excitement--Goldsboro is to be evacuated in less than 24 hours." (Item 664) In this short entry Collier sets a scene of chaos on the outskirts of Goldsboro, and Sherman's forces haven't even arrived yet. In Collier's later entries she is writing from Hillsboro, which sheds light to the fact that they evacuated the city for fear of Sherman and his forces. Sherman did not disappoint either with his arrival into Goldsboro. He continued his consistent destruction and pillaging, especially on the outskirts of town (as mentioned above by Spencer). Spencer again described her seemingly distaste for Sherman as he begins to take control of the city. One particular instance outlines Sherman's personal carelessness by kicking out a large family so that he could occupy their home. Spencer wrote: "One of the first of General Sherman's own acts, after his arrival, was of peculiar hardship. One of the oldest and most venerable citizens of the place, with a family of sixteen or eighteen children and grandchildren, most of them females, was ordered, on a notice of a few hours, to vacate his house, for the convenience of the General himself, which of course was done. The gentleman was nearly eighty years of age, and in very feeble health." (Item 729) Spencer's account shows that while Schofield had protected the city well from invasion and damage, Sherman himself is the one who makes the final decision and does what is best for his army and in this instance himself. While protection was practically guaranteed within the city of Goldsboro, we see that no person, no matter the age, sex, or health could escape the wrath that Sherman brought with him wherever he went. The citizens of Goldsboro and its outskirts were both effected differently by the occupation by the Sherman's union forces. The next sections of this exhibit will move forward in discussing the treatment by the Union soldiers and effects of that treatment on citizens in the outskirts of the city, and then move on to discuss that within the city.

Cornelia Spencer, "The Last Ninety Days of the War In North Carolina" (1866) 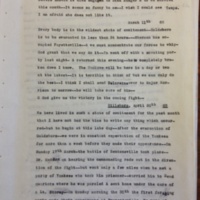