Hollowell described General Sherman and his entrance into Goldsboro. He described the cooperation for citizens and soldiers by his discussion of the guards in front of family homes. Those that wished for protection could request it at the provost marshal office, and a guard would be provided at their door front. It appeared that many of the officers were against the pillaging of houses in the South as Hollowell outlines, that when officers approached, soldiers often scattered and resumed their duties. They would quit their torment over the citizens. In his description of the city, Hollowell also stated that their was a five or six mile circle around Goldsboro in which the army camped out, and little to no pillaging happened within it.

COMING OF THE YANKEES
(By J. M. HOLLOWELL)

Since I stopped writing of my early recollections of Goldsboro, I have been asked by some of the young folks why I did not tell more about the Yankee army coming to Goldsboro in 1865, and what they did, etc. And I have promised some of them to write a little along that line.
General Braxton Bragg was in command of the Confederate forces in this department. Goldsboro was the objective point of three federal forces, to-wit: General Sherman, on his famous march from Atlanta, was headed for this place, coming via Fayetteville; General Terry, from Wilmington, who was following pretty closely the line of the A. C. L. railway (then the old Wilmington and Weldon railroad), and General Schofield's army advancing from New Bern.
Gen. Joseph E. Johnston's army was in Sherman's front, slowly retreating. Terry's force was not very large, hence no great anxiety was felt on his account. The greatest immediate menace to the town appeared to be Schofield's forces from New Bern, hence Bragg threw the major part of his forces in front of Schofield below Kinston. This was about the middle of March. There were several days skirmishing near Southwest creek between Bragg and Schofield, Bragg capturing a thousand prisoners, but being largely outnumbered he gradually fell back, Schofield closely following him.

On Sunday, March 19, the battle of Bentonville was fought by Johnston and Sherman. All day at intervals the cannonading could be heard. The result of that battle hurried up the retreat of Bragg, otherwise he would have been prevented by Sherman from making a junction with Johnston. Bragg's army began evacuating the place on Tuesday morning, the 21st, and his rear guard passed out as Schofield's advance guard came in, there being some firing between them, though I don't think there were any casualties. Bragg fell back across Little River via Hooksâ€™ bridge and halted near Walters.

The first I saw of Schofield's men was about three o'clock in the evening. They came marching in Boundary street, west, following the direction Bragg had gone. The Yankees had come in via Webbtown, and were all over town, the larger part being halted near Jumping Run. At the time of which I write nearly all the land now owned by J M. Grantham and the land where Bellevue is was in piney woods, and by dark all the space I have mentioned, including along where Griffin's mill stands, was ablaze with camp fires, as well as all the vacant lots in the northern section of town, and the tearing down of fences, barns, stables and outhouses could be seen and heard in every direction.

The building I occupied was near the corner of George and Boundary streets. When the first ones marched by two or three of the men opened the gate and came up on the piazza. They were partly drunk and asked for whiskey. They were told there was none there. By this time a mounted officer rode up hurriedly, and dismounting, ran into the piazza and ordered the men away, kicking one of them as he went out. The officer then asked if a guard was desired, and being answered in the affirmative, he immediately placed a guard at the gate. Pretty soon an officer came and said that Colonel Classen, of the One Hundred and Thirty-second New York regiment, wanted to occupy two rooms and the kitchen of the premises. Well, it is hardly necessary to say they occupied them; and I will do them the justice of saying that I never met a more gentlemanly behaved set of men than Colonel Classen and his staff.

On Thursday, the 23d, Sherman's army reached this place. I never knew when Terry got here, nor do I know whether his army as a whole ever entered the town, or remained over in the Genoa section, but there was within a circle of five or six miles around Goldsboro, more than 100,000 Federal soldiers and Federal â€œbummers,â€ because they bummed under the protection of the Stars and Stripes. They pilaged the country for miles around; took what they wanted and destroyed what they did not want. Corn and fodder, meat and lard, hogs, cattle, chickens, geese, ducks, horses, buggies, wagons, everything was taken. They would go to a farm house, take the man's horses, hitch them to his wagon, load the last piece of meat or the last barrel of corn and drive off, and the owner, if he was wise, said nothing. I have seen these foraging gangs come in with beeves and hogs they had shot down, split in half undressed, strung across horsesâ€™ backs. Out at Dr. Goelet's place, near Walters, they took the doctor's carriageâ€”a very fine old vehicleâ€”and loaded his bacon into it and drove it to town.
These pilagings were mostly within a few miles of this place; they were dubious about going ten or fifteen miles off unless in heavy forces. There were scouting parties of Confederates who occasionally ran up with them, and when they did it was bad luck for the Yankees, and many a one went off who never returned. It was bushwhacking, in all the name implies. In some instances where a vehicle could not be brought off, they would take an axe and destroy it by chopping the spokes. All kinds of deviltry that a cool, shrewd, ingenious Yankee could invent was resorted to.
I heard of an old woman and several small children, from whom they took everything except a little meal and a jug of sorghum, and not content, they took quids of tobacco from their mouths and dropped in the jug. Just across the lattice bridge, it was said, they killed several hundred horses and mules which they had taken from the people.

In town, whenever the officers wanted quarters, they would simply go and tell the family the number of rooms they wanted; if there was room enough left for the family, all right, if not, they just had to double up and make out the best they could. While here Sherman occupied part of Mr. Richard Washington's house, Schoffield part of Mr. E. B. Borden's, Howard part of Mr. W. T. Dortch's, Blair part of Mrs. H. M. Dewey's, Slocumb part of Mrs. Alford's, Cox part of Mr. John Everett's and Logan part of Mr. J. C. Slocumb's.
All the stores were taken by the settlers and stocks opened up. The army was paid off while here, and the sutlers did a lively business. New clothing was issued to the troops, and wagon loads of old clothing were left in their camps and given away to the negroes, and for three or four years after the war you could see the negro men dressed up in blueâ€”some with cavalry, some with artillery, and others with infantry stripes. I doubt if there was a half-dozen yard fences left standing in Goldsboro, unless where there was a guard.

A great many negroes from the country came to town and were fed by the army. There were but few men here, nearly all in the army. Those who were here were on their good behavior. Rations were issued by the army to a good many white people, some of them as good people as there was in the county. These people were forced by absolute necessity to ask for this help, as the army and â€œbummersâ€ had stripped them of everything. 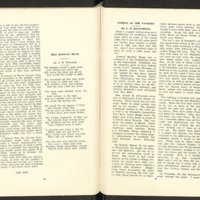 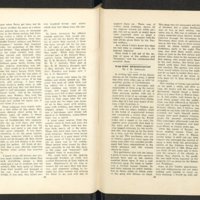