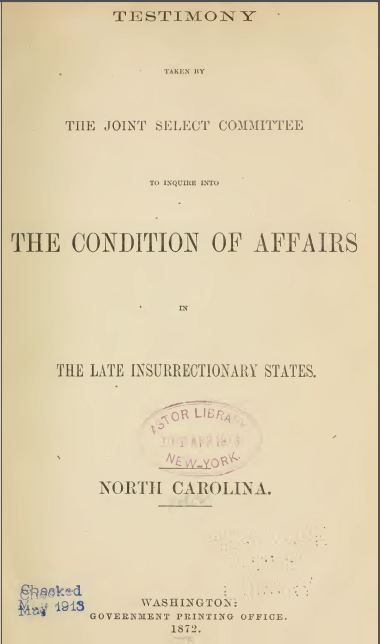 Finally, there is the Congressional report that were produced in direct relation to the rise of violence caused by the introduction of the Ku Klux Klan. In this report, Lowry was mentioned in numerous parts of the proceedings and during much of the questionings, issues of his political affiliation and if that was a factor in Lowry’s designation of victims:

Question. Have these outlaws any politics! What ticket do they support? To what political party do they adhere?

Answer. I think that Henry Berry Lowry never had much politics. All his relations, all his color, all his kin, all who are associated with him in any way, are republicans. He has been in one or two processions of the republican party; but having been under a ban in consequence of warrants for- his arrest, I do not think he has ever voted. I do not know how that is ; some say he has, and some say he has not ; but I think myself that he has never voted. I think all the balance of the band have voted the republican ticket. They are of that class that forms and makes up that party in that section of the State.

Question. And who are the men he has killed or made to quit the country-? Are they democrats or republicans?

Answer. They are all what are known to us as conservatives. I do not think that any who have quit the country are republicans. He has killed eighteen or twenty men. This one man has killed that many, and I think that two of them were republicans men who were impressed to hunt them as a part of the posse.”[1]

What is interesting in this report are the repeated mentions political parties, if they were used to designate victims, race, and social class. The fact that the politicians who were in the committee were trying to clearly pin point Lowry’s political affiliation, the political loyalties of his victims, if he attended rallies, among other questions showed that both sides of the U.S. Congress were equally determined to use the whole episode of the gang’s existence to further damage their opponents and jockey themselves into a stronger position. Another facet to take into consideration is how the cause of the creation of the Lowry Gang is still pined on the actions of the Home Guard, and that the arrest and abuse of the Lowry mother were still recounted, though the minute details were left out of the official report. The chairman of this investigation, Mr. Pool, begins to look at the Home Guard as the prime instigators of the whole affair in Robeson county.[2] The witness, despite his maneuverings around the chairman’s questions, cannot entirely discount the aspect that it was the policy of the Home Guard, to arrest and molest the Lowry family, which provoked Henry Lowry into action.[3]

The members of the committee who were asking the questions from this portion of the inquiry were John Pool, who was the head of the committee and a native North Carolinian, Francis Preston Blair, Jr., a democrat who stayed with the Union and served in the army during the war, and Charles Buckley, a republican who served as a chaplain in a colored unit during the Civil War.[4] All of these men showed a great interest as to the political and social orientations of the outlaw.  It was Mr. Blair who was the first to ask about Lowry’s personal political orientation, and the other two members who questioned Mr. Leitch looked into the witnesses’ view on the outlaw and his family, the social conditions of the county, while Mr. Blair focused much on the politics of the issue.  Another factor to consider is that Mr. Blair, a democrat, appeared to be giving questions to the witness that tried to make the outlaw appear villainous in Mr. Leitch’s answer, all the while the two republicans of the committee where trying to ascertain a more well rounded and non-biased view of the situation.

Another feature that can be seen from this document is the issue of local Republicans in Robeson county supporting the outlaw, and how this came to effect the machinations of the national political system. In the book, “To Die Game”, there is an episode where the outlaw was captured by the authorities during Lowry’s wedding of Rhonda Strong, and the local Republicans, who were in control of the town’s jails and policing forces. Two persons negotiated with the outlaw to a peaceful surrender of his persons. Lowry was also promised to be held in the debtor’s section of the prison and was not shackled, nor would he be refused food and those involved were criticizing with allowing little security in keeping Lowry held in his cell.[5] As such when Lowry escaped from his imprisonment, much of the blame was placed on the Republican administration in the county, who were responsible for building the specific jail and were charged with keeping him in prison.

[1] U.S. Congress, Report of the Joint Select Committee to Inquire into the Condition of Affairs in the Late Insurrectionary States (Government Printing Office; Washington, 1872), 278

[2] U.S. Congress, Report of the Joint Select Committee to Inquire into the Condition of Affairs in the Late Insurrectionary States (Government Printing Office; Washington, 1872), 294

[4] U.S. Congress, Report of the Joint Select Committee to Inquire into the Condition of Affairs in the Late Insurrectionary States (Government Printing Office; Washington, 1872), 294

[5] U.S. Congress, Report of the Joint Select Committee to Inquire into the Condition of Affairs in the Late Insurrectionary States (Government Printing Office; Washington, 1872), 294