Joseph J. Hoyle was a twenty-four year old soldier who fought alongside friends, cousins, and family members in the 55th Regiment of the North Carolina Infantry.

Joseph J. Hoyle was a twenty-four year old soldier who fought alongside friends, cousins, and family members in the 55th Regiment of the North Carolina Infantry. Lieutenant Hoyle was born in Cleveland County, North Carolina, and much of what we know about Hoyle came from his writings during the war published in Deliver Us from This Cruel War. The book includes many of the letters Hoyle wrote to his wife Sarah during the three years he served in the Confederate military. He was promoted on March 2, 1863, to 1st Lieutenant and again on November 25, 1863, to Sergeant. Thus, he became the commander in charge of Company F until August 31, 1864, when he died. Hoyle was a soldier who fought on General Robert E. Lee's frontline, engaging in legendary battles mostly in Virginia, including Gettysburg. (Hoyle 2010, 34)

Hoyle, as a teacher, was one of the most educated members of his regiment. He even wrote articles that were printed on September 15, October 6, December 22, 1862, and many other dates in subsequent years in the Spirit of Age.(Hoyle 2010, 67, 77, 87) Hoyle's duties also included keeping the men in formation while also preventing retreat. He helped to create Camp Greene in Virginia near the Franklin Depot as well as took part in picket and guard duty. He also spent much of his time drilling in preparing to fight, engaging in battles, and marching to new locations.(Hoyle 2010, 45)

Hoyle continued to fight for three prime motivations. The first motivation to fight came from his faith in God. He read his Bible daily, prayed for his unit and family, and sought to honor God until the war's end or death. His second motivation to fight was for his family, especially his wife. He desired to live a courageous life and knew the only noble way to come home to see her would be through victory or war's end. His final motivation was for his fellow soldier. He recognized that the men in his unit were fighting a noble fight, facing death. Their comradeship elicited the courage for the men in the 55th regiment, specifically Joseph J. Hoyle, to fight till death or war's end.(Hoyle 2010, 66, 70, 78, 81) Lieutenant Hoyle was struck by a bullet in his right leg in late August of 1864. His leg was amputated and he died in a richmond hospital on Septermber 1, 1864. Hoyle remained loyal to his troops and died while fighting for his comrages, family, God, and the Confederate nation. (Hoyle 2010, 175) 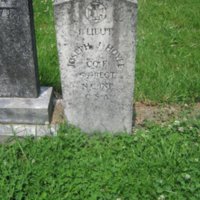 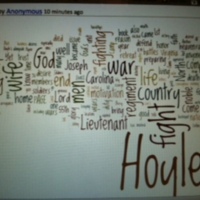