Thomas C. Ruffin (1787-1870) was the elected judge of the Supreme Court of North Carolina from 1829 through 1852 and once again from 1858 through 1859. From 1833 until 1853, Thomas Ruffin served the Court as Chief Justice. Ruffin attended Princeton University where he received his bachelors degree in 1805. After three years of successfully studying law, Ruffin was admitted to the bar in 1808 and in 1809 moved to North Carolina to practice law. From 1813 until his election to the North Carolina Supreme Court in 1829, Ruffin successfully maintained positions in North Carolina House of Commons, elected judge of the Superior Court, member of the board of trustees at the University of North Carolina, and elected candidate for the presidential elector on the William Crawford ticket in 1824. From 1828 to 1829, Ruffin was elected as the president of the failing State Bank of North Carolina where during his twelve month term her successfully prepared the way to cose out in credit the remaining term of the charter. Nevertheless, during Ruffin's tenure as judge of the North Carolina Supreme Court, Ruffin was accredited the most successful and influential judge in North Carolina history while receiving the distinction of being named one of the ten greatest judges in American history by Harvard Law School Dean, Roscoe Pound. Ruffin was best remember for his important decisions regarding the strengthening of the judiciary and promotion of judicial review, illustrated in Hoke v. Henderson (1833); his support of eminent-domain and the creation and expansion of North Carolina railroads, illustrated in Raliegh and Gaston Railroad Comapny v. Davis (1837); and finally his national resounding decision regarding the absolute authority of masters over slaves in State v. Mann (1829). After 24 years of residing on the North Carolina Supreme Court, Ruffin commited himself as a on his plantation estate and from 1854 through 1860 he became president of the North Carolina Agricultural Society. By 1860, with the nation on the war, Ruffin remained committed to the southern Constituion postition which supported the rights of slaveholder's to posses slaves as property. Throughout the Civil War and during Reconstuction, Ruffin continually fough for southern principles while openly disagreeing with Republican Reconstruction policies in the state. 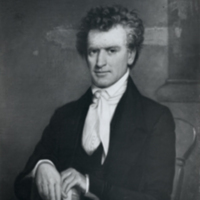