On March 9th, 1860, in Raleigh, Governor Ellis gave his acceptance speech for Governor. In this speech, however, Ellis critiques the circulation of abolitionist propaganda asks, “Is further proof wanted for the designs of these men? Does the tragedy of Harper’s Ferry teach us nothing?...when the graves of executed felons drew forth copious tears, as though one distinguished for patriotic service to the country had fallen!” Ellis, still an anti-secessionist, recited the topics of several newspaper articles published just days after the execution of John Brown that focused on the glorification of Brown in the North. By addressing this at the Democratic State Convention, he suggests that, if Northern abolitionists continue these efforts, North Carolina’s secession policies might change. Ellis continues by reminding politicians in North Carolina of the events at Harper’s Ferry, and those immediately proceeding:

“Fraud and force would be their [abolitionist] favorite means. Secret encouragement and open aid to assassins like John Brown, with an assurance of protection in case of failure, -jut such protection, except on a large scale, as the black Republican Governor of Iowa gave to one of the Harper’s Ferry conspirators… the difference between a Northern Democrat and a black Republican. Gov. Packer, of Pennsylvania, surrendered one of the Harper’s Ferry traitors, promptly, upon demand of the Governor of Virginia. He is a Democrat. Gov. Kirkwood, of Iowa, refused to surrender, upon demand, one of the same conspirators, but gave him shelter and protection.” [1]

Here, Ellis shows that the North is not incapable of Southern, or more specifically, Democratic, sympathies, and that it is important to distinguish abolitionists from Northern Democrats. He spoke of how the two competing forces, Democrats, and the joint efforts of black Republicans, Freesoilers and Abolitionists are against each other over the issue of African slavery and that the intensity increases following Brown’s raid. By stating that abolitionists will use force, Governor Ellis emphases the fears of another Northern invasion, four months after Brown’s execution, as well as the growing conflict between Democrats and abolitionists.

The message Governor Ellis gave to the General Assembly focuses less on remembering John Brown’s raid, and more on the close political and legislative relationship that North Carolina shares with Maryland and Virginia. “Policy, then, as well as sympathy and feelings of brotherhood engendered by a common interest, requires us to exert our energies in the defense of Maryland and Virginia.”[2] As Governor, John Ellis provides insight into how politicians thought after Brown’s raid, and while he was opposed to secession, he showed that the secessionist movement was gaining momentum after the John Brown raid and that another event similar to Brown’s raid would most likely cause North Carolina to secede.

When the North Carolina government ultimately declared independence, they would reference Brown’s raid as a significant motivating factor for secedingfrom the Union. The Senate Journal records:

“Resolved, That we, the people of North Carolina, do hereby dissolve the political bonds, which connected us to the Government of the United States of America, and absolve ourselves from all allegiance to said Government, and abjure all political connection, contract or association with that Government, who have blockaded our ports, ruined our commerce and wantonly trampled on our rights and liberties, and shed inhumanly the blood of Southern patriots at Harper's Ferry and at Baltimore.”[3]

The deciding factor for secession, according to Link, was Lincoln’s request for 75,000 volunteers to suppress a rebellion in South Carolina. Link confirms this by showing that “North Carolina’s fourteen Unionist newspapers all changed their stance, now endorsing disunion.”[4] Without the precedent set by John Brown’s raid on Harper’s Ferry and the hostile atmosphere it caused in North Carolina, Lincoln’s request most likely would not have met such quick opposition it did. 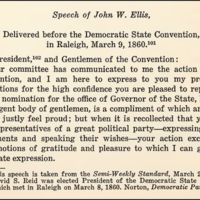 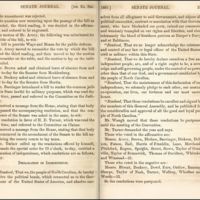