At the start of the Civil War, James Rumley lived pretty well in Beaufort, N.C. He was well educated, led a good life as county clerk, and owned property and a couple of slaves. Unmarried, he had no family to support.He was an ardent Southerner, but at age 50 did not have to enlist for military service. The Union army would arrive, against Rumley's wishes, and start to transform the landscape of eastern North Carolina. The Southern Mind under Union Rule is Rumleyâ€™s diary from March 1862 to August 1865. It was the arrival of Federal forces at Beaufort that prompted Rumley to begin writing.

"October 31, 1863.
Our citizens were startled today by the sudden appearance in town of James W. Bryan Esq., who lately came to New Bern from the Confederate lines under a flag of truce, and was called on business tot he Provost Marshall's office in Beaufort. No living man could have been more welcome to us in our dreary captivity. His visit was short- very short, but long enough to remind us forcibly of those better days when he towered among us in the light and liberty of civil law- days that are gone forever by, but now in the retrospect, look bright as Heaven compared with the present starless night." 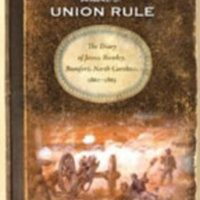