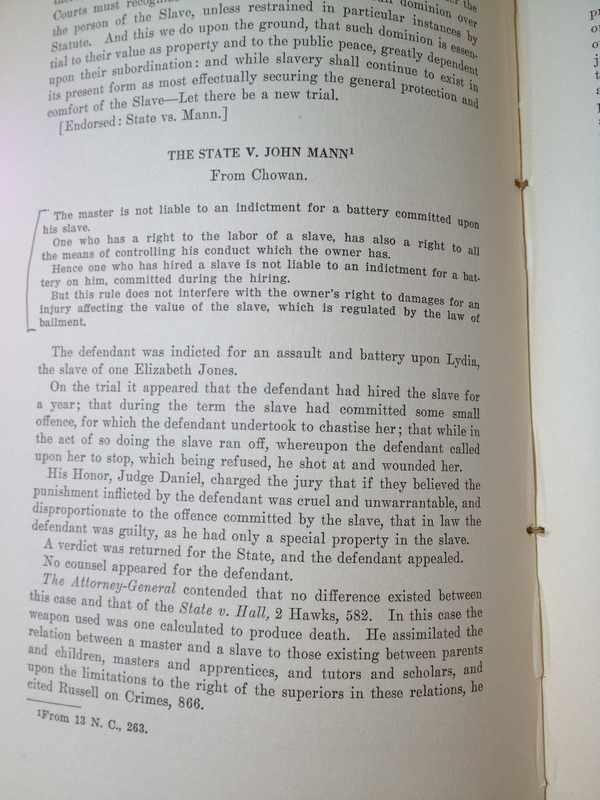 Thomas Ruffin was a North Carolina Supreme Court Justice from 1829 until 1852. Ruffin is most well known for his opinion in the 1830 State v. Mann decision in which he stated, “The power of the master must be absolute, to render the submission of the slave perfect.” (Item 44) Ruffin claimed to have a “struggle, too, in the judge’s own breast between the feelings of the man and the duty of the magistrate” and that he “gladly would have avoided this ungrateful question.” (Item 44) Evidence from Ruffin’s activity regarding slaves, his reasoning and rhetoric in the Mann case, as well as his other court decisions show that he was protecting the institution of slavery and the rights of slaveholders when he gave his opinion on Mann.

Mann’s physical beating was something Lydia decided not to tolerate. Trusting that Josiah Small would not stand for her abuse either, she started to run. Mann ordered her to stop. She did not. (Greene 2009, 721)

Mann then shot and wounded Lydia in the shoulder as she ran back to Josiah Small’s property. (Greene 2009, 721) Mann was the indicted after a true bill was returned by a grand jury. (Greene 2009, 722) The case then went to trial court in Chowan County and Mann was convicted. (Item 44) Mann then appealed for the case to be heard by the North Carolina Supreme Court. (Item 44) The case then moved to the Supreme Court, where Justice Ruffin gave his opinion.

The State v. Mann decision has been studied by numerous historians, but the most accurate and best researched writings on the case have come over the past decade. Sally Hadden was the first to cite documents regarding Thomas Ruffin’s activity in the slave trade and his overseers cruel treatment of slaves in her article “Thomas Ruffin and State v. Mann,” which appeared in Local Matters: Race, Crime and Justice in the Nineteenth Century South, published in 2001. Mark Tushnet's 2003 book Slave Law in the American South focuses on the Mann decision its entirety, which was the first lengthy publication on the decision.

The most notable literature on the State v. Mann decision spurred from a 2007 conference at the University of North Carolina at Chapel Hill that was focused on Thomas Ruffin’s legacy and the Mann case. This conference led to a 2009 edition of the North Carolina Law Review that was filled with the papers discussed in 2007. The North Carolina Law Review features ten articles, including strong papers by Sally Greene, Eric Muller, James Wynn and Alfred Brophy. Greene’s article, “State v. Mann Exhumed” features a great amount of background on the case, including information on key players such as Thomas Ruffin, John Mann, Josiah Small and Elizabeth Jones. The article also provides a large amount context to the social context of the case, and gave a critical view of Ruffin’s decision based on new documents. Eric Muller’s contribution to the North Carolina Law Review was an article titled: “Judging Thomas Ruffin and the Hindsight Defense.” This article rehashed Hadden’s findings of Ruffin’s slave activity, and builds upon it with more documents regarding Ruffin and his activity with slaves. The article breaks down the Mann decision, and claims to “force a reconsideration of Judge Ruffin and his Mann opinion. (Muller 2009, 757-58) Alfred Brophy's contribution was titled “Thomas Ruffin: Of Moral Philosophy and Monuments.” Brophy explores the Mann decision and compares it with many of Ruffin’s other decisions that dealt with slavery, and emancipation. James Wynn’s article “State v. Mann: Judicial Choice or Judicial Duty?” argues that Ruffin had a choice in the Mann decision and used it “to preserve the relational status quo between master and slave.” (Wynn 2009, 991)

This paper looks to combine the newly found evidence discovered by Greene and Muller, to find a more complete view on Thomas Ruffin’s State v. Mann opinion. The writers from the 2007 conference at the University of North Carolina provided a wealth of new information on Ruffin and the case itself. Because this new research was being presented at the same conference, the contributors were not able to view the evidence found by others. This project has provided the opportunity for a comprehensive view of Mann decision using the combined findings of the authors previously stated, as well as my findings from the Southern Historical Collection at the University of North Carolina.