In this excerpt from his Young People's History of North Carolina, D. H. Hill focused on slavery as the cause of secession.

427. The John Brown raid.--Two events took place in 1859 which threw North Carolina into a state of wild excitement. The first was John Brown's seizure of the United States arsenal at Harper's Ferry on the Virginia side of the Potomac River. The purpose of this violent man--who was hanged, by the State of Virginia, for his effort--was to free the slaves and arm them against their masters. Military companies from many places in North Carolina offered to march to Virginia at the time of this raid. The second event was the wide circulation given to a North Carolina book against slavery. This book was written by Hinton Rowan Helper and was called "The Impending Crisis."

428. The results of these two events.--There were three hundred thousand slaves in North Carolina. These were owned by about forty thousand families. In some of the eastern counties the negroes outnumbered the whites. The people feared that large numbers of negroes might be led, by such lawless men as Brown, to rise against their owners. They believed that such books as Helper's were being scattered in the South to break up slavery without regard to their rights. They thought that John Brown's efforts to lead to a slave uprising were encouraged by the Abolition Societies of the North, which were clubs formed to wage war on slavery. Hence there was much uneasiness and much angry feeling against the North.

429. What the State thought of Lincoln's election.--To add to the unrest, Abraham Lincoln, the candidate of the Republican party, was elected President. The South feared that Lincoln's party would try to break up slavery at any cost. Some of the States made ready to secede, or leave the Union, shortly after his election. North Carolina too was alarmed at Lincoln's election. Its people had no wish to leave the Union, but they were saddened by the thought that the power of the government might be turned against what they believed were their rights. Yet they were willing to await the President's own acts. They did not intend to be hurriedly driven out of the Union of their fathers. Their feeling was very nearly put in the words, "Let us prepare, but let us watch and wait."

430. Several States secede.--In December the news came flying, "South Carolina has seceded." On January 9, 1861, came another stirring message, "Mississippi has withdrawn from the Union." Then in rapid succession Florida, Alabama, Georgia, Louisiana, and Texas joined in the secession movement. Last of all came the tidings that the seven seceding States had formed a Confederate government at Montgomery, Alabama, and elected Jefferson Davis President. There were now two governments. With which should North Carolina link its fate?

431. Shall there be a convention?--During this rapid whirl of events the Legislature met. On January 24th it directed the people to vote whether they wanted a convention to consider secession. The governor set February 28th as the day for the election. Speakers at once hurried from town to town. Meetings were held. Newspapers took columns to set forth their views. Leaders from the seceded States went here and there urging the voters to join the Confederacy.

432. North Carolina's first answer.--On the day of so grave an election the voters cast their ballots, and then waited with anxious hearts to hear the result. The call for a convention was defeated by 651 votes. Thus after Lincoln's election and after seven States had seceded, North Carolina voted against even considering secession. But, while North Carolina voted against a convention, it never for a moment gave up its belief in two principles: first, that, under the Constitution, the Union could not interfere with a State's right to hold slaves; second, that the Federal government could not force one State to fight another.

433. The Peace Conference.--Just a few weeks before the vote on the convention, the State had sent ex-Chief Justice Thomas Ruffin, ex-Governor J. M. Morehead, ex-Governor David S. Reid, D. M. Barringer, and George Davis to a Peace Conference in Washington. But on February 24th the conference broke up in failure.

434. Preparations for war.--Although still hoping for peace, North Carolina now saw that there was indeed little hope of not having to fight for or against its sister States of the South. Hence it returned to its preparations for war. Just after passing the convention bilI, the Legislature had voted three hundred thousand dollars to buy arms. Ten thousand volunteers were now called for, and the governor was instructed to enroll twenty thousand more to serve in case the State was invaded.

435. President Lincoln's address.--On the 4th of March, Abraham Lincoln took the oath as President. In his address he declared that he would "hold, occupy, and possess the property and places belonging to the government, and collect the duties and imposts." The South looked on these words as a declaration of war, for the President could hold the Southern forts and collect duties from the seceded States only by force.

436. The call to arms.--On April 12, 1861, South Carolina troops fired on Fort Sumter and the fort was surrendered to them. At once President Lincoln called for seventy-five thousand troops, and more than that number rushed to answer his call. President Davis also asked for men to resist invasion, and the camps of the Confederacy were soon swarming with soldiers. The long-delayed strife was about to begin.

437. Governor Ellis's answer to a call for troops.--In April 15th Governor Ellis was notified by the secretary of war that North Carolina would be expected to furnish two regiments to make war on the seceded States. The governor closed his refusal with these words: "I can be no party to this wicked violation of the laws of the country, and to this war upon the liberties of a free people. You can get no troops from North Carolina."

438. Ready for war.--The long agony of doubt was at last over. North Carolina now knew that it had either to make war in company with its sister States of the South or make war against them. This being clear, there was not room for a moment's pause. Governor Ellis at once called the Legislature to meet. He also directed the State troops to seize the forts on the coast and the United States arsenal with all its guns at Fayetteville. He called for volunteers, formed a camp of instruction at Raleigh, and asked Major D. H. Hill of Charlotte to take charge of the camp and to have the volunteer companies drilled and disciplined on their arrival.

439. The Legislature calls a convention.--The Legislature met on May 1st. Within less than two hours after its assembling, it ordered another vote on the question of holding a convention. The election was set for May 17th, and the convention, if voted, was directed to meet on May 20th. The Legislature then turned to war preparations. In answer to Virginia's request, it permitted the governor to send troops to aid in the coast defense of that State, for Virginia too had now seceded. The sum of two hundred thousand dollars was voted to manufacture arms at the Fayetteville arsenal. The Legislature also directed the governor to enroll, arm, and equip twenty thousand volunteers for twelve months and ten thousand State troops to serve as long as the war lasted. The further sum of five million dollars was voted for public defense.

440. The Convention of I861.--There was little time for people to think whether or not they wanted a convention, but none was needed. The whole matter at issue was, "Shall North Carolina fight the North or the South?" The convention was called and met in Raleigh on the twentieth day of May. This convention was probably the ablest body ever assembled in the State. The scene at the capitol was one never to be forgotten. The grounds and building were thronged with the most distinguished men and women of the State. The bright uniforms of the soldiers from the nearby camp mingled with the sober dress of citizens and the fluttering ribbons of maids and matrons. At the hour of opening, the galleries, lobbies, and floor were packed with men whose names are a part of the State's proudest history. After some difference as to how the ordinance of separation should be worded, the convention solemnly declared that North Carolina was no longer a member of the Union of States, but was once more a sovereign, independent State. As the ordinance was signed by the members, Ramseur's superb battery thundered a salute, every bell in the city rang, bands played, and a mighty shout rolled across the capital city. A week later, May 27, 1861, North Carolina was received as a member of the Southern Confederacy. Soon its First Regiment was hurried to Virginia in time to take part in the opening battle of the war.

441. Death of Governor Ellis.--In July, Governor Ellis, who had gone to Virginia in search of health, died. Henry T. Clark, speaker of the Senate, then became governor and had therefore to take up the difficult duty of hurrying forward war preparations. 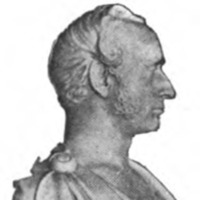 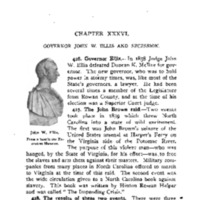