William J. Hardee, lieutenant-general for the Confederate States of America, wrote the letter to William Sherman, a major-general for the Union. The letter was in response to one that Sherman had sent earlier that day, December 17, 1864.  Sherman asked Hardee to surrender Savannah, and if not done, Sherman promised to burn and destroy Savannah, and even starve the inhabitants, if needed.  Hardee’s response demonstrated the tactics used by Sherman were not that of civilized warfare, and that Hardee had avoided using such tactics during war. Hardee admitted he would deviate from his civilized warfare if Sherman continued in his barbaric ways. Hardee confirmed that even C.S.A. generals viewed the tactics by Sherman as unjust and not part of war, similar to what Confederate citizens believed.  The main photo is of General Hardee.

General: I have to acknowledge the receipt of a communication from you of this date, in which you demand “the surrender of Savannah and its dependent forts,” on the ground that you “have received guns that can cast heavy and destructive shot into the heart of the city,” and for the further reason that you “have, for some days, held and controlled every avenue by which the people and garrison can be supplied.” You add that, should you be “forced to resort to assault, or to the slower and surer process of starvation, you will then feel justified in resorting to the harshest measures, and will make little effort to restrain your army,” etc., etc. The position of your forces (a half-mile beyond the outer line for the land-defense of Savannah) is, at the nearest point, at least four miles from the heart of the city. That and the interior line are both intact.

Your statement that you have, for some days, held and controlled every avenue by which the people and garrison can be supplied, is incorrect. I am in free and constant communication with my department.

Your demand for the surrender of Savannah and its dependent forts is refused.

With respect to the threats you conveyed in the closing paragraphs of your letter (of what may be expected in case your demand is not complied with), I have to say that I have hitherto conducted the military operations entrusted to my direction in strict accordance with the rules of civilized warfare, and I should deeply regret the adoption of any course by you that may force me to deviate from them in future. I have the honor to be, very respectfully, your obedient servant, 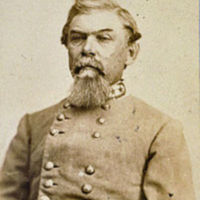 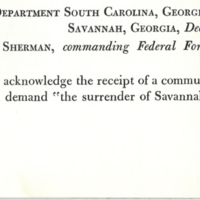 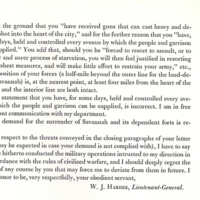