William T. Sherman, a major-general for the United States Army during the Civil War, wrote the letter to General Henry Halleck, who was in Washington D.C. at the time. The letter came towards the tail end of Sherman’s campaign in Georgia and his capture of Savannah, a “Christmas gift” for President Lincoln. In his letter, Sherman told of how important his campaign through the heart of the South was for the war effort. Particularly, Sherman noted that this war was different, as he had to fight hostile citizens, and make all feel the horrors of war. As bad as the treatment had been for Georgia, Sherman hinted towards the escalation of destruction that South Carolina would face when his army arrived, as it deserved it. However, Sherman seemed to not have a care with how his soldiers would treat the Palmetto State. Sherman did not announce an ounce of regret for anything that happened.  The main photo is of Union Headquarters in Savannah.

Headquarters military Division of the Mississippi,

In the Field, Savannah, Ga.,

I had the pleasure to receive your two letters of the 16th and 18th instant today, and I feel more than usually flattered by the high encomiums that you have passed on our recent campaign, which is now complete by the occupation of Savannah . . . .

I attach more importance to these deep incisions into the enemy's country, because this war differs from European wars in this particular: we are not only fighting hostile armies, but a hostile people, and must make old and young, rich and poor, feel the hard hand of war, as well as their organized armies. I know that this recent movement of mine through Georgia has had a wonderful effect in this respect. Thousands who had been deceived by their lying newspapers to believe that we were being whipped all the time now realize the truth, and have no appetite for a repetition of the same experience. To be sure, Jeff. Davis has his people under pretty good discipline, but I think faith in him is much shaken in Georgia, and before we have done with her South Carolina will not be quite so tempestuous. I will bear in mind your hint as to Charleston, and do not think "salt" will be necessary. When I move, the Fifteenth Corps will be on the right of the right wing, and their position will naturally bring them into Charleston first; and, if you have watched the history of that corps, you will have remarked that they generally do their work pretty well. The truth is, the whole army is burning with an insatiable desire to wreak vengeance upon South Carolina. I almost tremble at her fate, but feel that she deserves all that seems in store for her. Many and many a person in Georgia asked me why we did not go to South Carolina; and, when I answered that we were en route for that State, the invariable reply was, "Well, if you will make those people feel the utmost severities of war, we will pardon you for your desolation of Georgia." I look upon Columbia as quite as bad as Charleston, and I doubt if we will spare the public buildings there as we did at Milledgeville . . . .

Assuring you of my high personal respect, I remain, as ever, your friend, 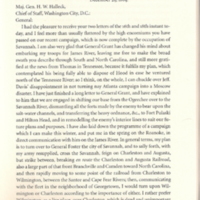 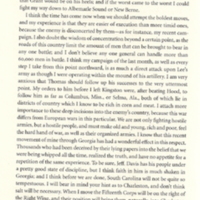 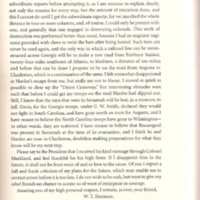