William T. Sherman, a major-general for the United States Army during the Civil War, issued Special Field Orders No. 120 just prior to leaving Atlanta in November, on the way to capture one of the South’s jewels, Savannah, Georgia. The document illustrated the wide range of activities that Sherman approved of when it came to destroying property, such as houses of Southern people, to end the war physically and psychologically. The liberal foraging of Southern food was also vital to supply Sherman’s army but also struck at a personal need of many in the South, who struggled to maintain necessities like food. While Sherman restricted trespassing, although it did happen, he was willing to do enough, in his mind, to end the Civil War, by bringing war to civilians.  The main photo is of Kingston, Georgia, when Sherman and his men occupied the city.

Headquarters Military Division of the Mississippi,
In the Field, Kingston, Georgia, November 9, 1864


... IV. The army will forage liberally on the country during the march. To this end, each brigade commander will organize a good and sufficient foraging party, under the command of one or more discreet officers, who will gather, near the route traveled, corn or forage of any kind, meat of any kind, vegetables, corn-meal, or whatever is needed by the command, aiming at all times to keep in the wagons at least ten day's provisions for the command and three days' forage. Soldiers must not enter the dwellings of the inhabitants, or commit any trespass, but during a halt or a camp they may be permitted to gather turnips, apples, and other vegetables, and to drive in stock of their camp. To regular foraging parties must be instructed the gathering of provisions and forage at any distance from the road traveled.

V. To army corps commanders alone is entrusted the power to destroy mills, houses, cotton-gins, &c., and for them this general principle is laid down: In districts and neighborhoods where the army is unmolested no destruction of such property should be permitted; but should guerrillas or bushwhackers molest our march, or should the inhabitants burn bridges, obstruct roads, or otherwise manifest local hostility, then army commanders should order and enforce a devastation more or less relentless according to the measure of such hostility.

VI. As for horses, mules, wagons, &c., belonging to the inhabitants, the cavalry and artillery may appropriate freely and without limit, discriminating, however, between the rich, who are usually hostile, and the poor or industrious, usually neutral or friendly. Foraging parties may also take mules or horses to replace the jaded animals of their trains, or to serve as pack-mules for the regiments or brigades. In all foraging, of whatever kind, the parties engaged will refrain from abusive or threatening language, and may, where the officer in command thinks proper, give written certificates of the facts, but no receipts, and they will endeavor to leave with each family a reasonable portion for their maintenance....

By order of Major-General W.T. Sherman 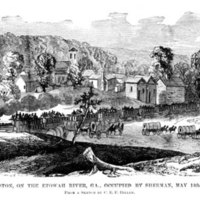 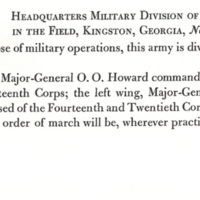 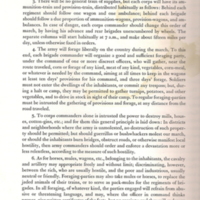 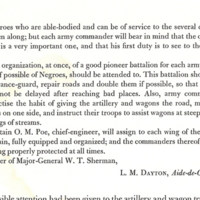