Frances Howard, a daughter of prominent plantation owner Charles Howard of Georgia, recorded events that occurred in Savannah, Georgia, as Sherman’s men occupied the city. Her house in Savannah was located across the street from Union general Barnum’s residence, for his time in Savannah. Although the town of Savannah had been occupied for roughly a month by this time (January 21, 1865), the resentment among women of Savannah towards the Union remained strong. As written about in Frances Howard’s diary, one woman did not want to show any allegiance or respect to the Union, even the flag. The woman described in the diary was willing to even go to jail if General Barnum wished to do so with her. Even after a month of occupation and rough treatment, Confederate women still failed to support the Union cause, even in minor ways.  The main photo is an aerial view of Savannah, Georgia.

A lady was passing the general’s office when, noticing the United States flag stretched above the sidewalk, she stepped down into the sand to avoid passing under it. The guard called to her to walk under the flag but she refused to obey him, so he took her to the general.

“Madam,” said he, “I understand that you refused to pass under my flag. Did you?”

“I did,” she replied quietly. “Am I not at liberty to walk in the sand if I prefer it to the sidewalk?”

“Yes,” said he excitedly; “but you intentionally avoided my flag. I will make you walk under it.”

“You cannot make me,” she replied excitedly. “You may have me carried under it, but then it will be your act – not mine.”

This answer irritated him not a little, and he said angrily: “I will have you arrested and sent to prison.”

She looked at him coolly, then replied: “Send me to prison if you will I know you have the power, if not the right, and see if you can shake my resolution.”

“Well,” he said, “I will have the flag hung in front of your door, so that you cannot get out without walking under it.”

“Then I will stay at home, and send the servants,” she answered. “They will not mind.” 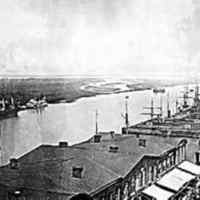 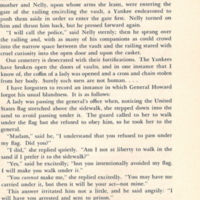 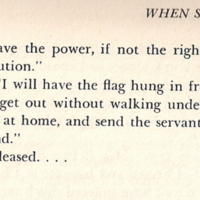