Thomas Osborn served as an artillery officer with General William Sherman of the Union Army as it marched through the South in 1865. The account provided by Osborn, in February of 1865, from the state capitol of South Carolina, Columbia, was very strong. He reflected heavily on the splendid sight of Columbia burning and in a way that minimized other atrocities, which he stated as being wrong, like the shooting of African-Americans. He attributed the burning of Columbia to the Confederates, as he listed prominent Confederate military leaders, Wade Hampton, Pierre Beauregard and Joseph Wheeler. While some evidence does support that the Confederacy burned its own city, some also claimed that it could have been U.S. soldiers that started the fire. The situation was unclear. However, many U.S. soldiers worked to help the local citizens as Columbia burned. Some soldiers, like Osborn, believed “the burning of the city is an advantage to the cause and a just retribution to the state of South Carolina.” Osborn demonstrated the hostility that many U.S. soldiers still possessed towards South Carolina for leading the secession, in their minds.  The main image is of Columbia burning.

This day has been the most eventful one to us of the campaign, and one which the historian of South Carolina cannot forget. This morning Columbia was a beautiful little city, tonight it is a “Sea of fire.”

The scene is both terrible and grand....

One cannot conceive of anything which would or could made a grander fire than this one, excepting a larger city than Columbia. The city was built entirely of wood, and was in most excellent condition to burn. The space on fire at midnight was not less than one mile square, and one week before, sheltered from 25,000 to 30,000 people. The flames rolled and heaved like the waves of the ocean; the road was like a cataract. The whole air was filled with burning cinders and fragments of fire as thick as the flakes of snow in a storm. The scene was splendid-magnificently grand.

The scene of pillaging, the suffering and terror of the citizens, the arresting of and shooting negroes, and our frantic and drunken soldiers, is the other side of the picture, and this I will leave for the present of the imagination of those who choose to dwell upon it. It has for all these been sad indeed. I have in this war, seen too much suffering by far, and choose rather to remember the magnificent splendor of this burning city.

There were stored in the houses or cellars through the city quite large quantities of loaded arms and shells, which went off or exploded as the fire reached them.

In one or two localities, the explosion of loaded arms was like the firing of a line of battle, and compelled all in the vicinity to beat a retreat. The explosion o f shells proved that some of the projectiles stored in private houses were very large, the reports was like the firing of artillery. How or why these things were stored in private houses can only be guessed at.

This day’s work has been one of marked success as a military achievement. We have the capital of the State, and the control of all railroads up to this point. We have the city, too, without having to fight a great battle for it so far from a base of supplies and where our wounded could not be well cared for. The destruction of the city was against the wishes of our commanders, and was originally owing to the fires set by their own people, and doubtless with expectation that the city would burn. How men can, or could be such fools as not to expect the city to burn up when a pile of cotton bales two hundred yards long was set on fire in the main street, with all the cords of the bales cut, as was the case, is more than I can tell. And on the other hand, why Johnson, Beauregard, Hampton, and Wheeler should be such unmitigated fools as to wish to burn Columbia, is more strange. Yet I know the facts to be as I have stated, as I was one of the first to enter the city, and have been here since.

That all citizens have here terribly no one can doubt, and that the fire was against the wishes of all our generals, I know. Yet I believe the burning of the city is an advantage to the cause and a just retribution to the state of South Carolina. 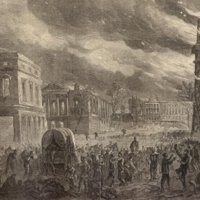 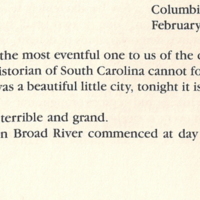 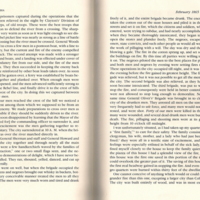 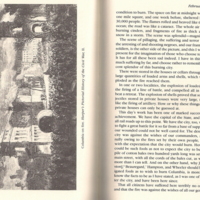 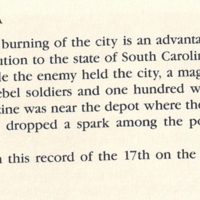