Wade Hampton, a lieutenant-general for the Confederate States of America, issued the letter on February 27, 1865 to Major-General William Sherman of the U.S. Army. Hampton’s response came two days after Sherman had called out Hampton for supposedly issuing an order to kill all foragers. The topic regarding the U.S. Army’s foragers had been a controversial one, as many U.S. soldiers may have disagreed with their practices but realized how beneficial they were to the war effort. Southerners, civilians and military, had long been disgusted and repulsed by foragers. Southerners believed foragers went beyond proper warfare. In his letter, Hampton refuted the claim that he had ever issued an order to kill all foragers but believed that Sherman had permitted the robbing of homes, and leaving some cities on the brink of starvation, although not directly ordered. Hampton heavily criticized Sherman’s men for being barbarous, as they attacked a home front that had no protectors, just women, children and old men at home. Hampton’s letter was largely based off the devastation that happened in South Carolina, particularly Columbia. Hampton showed how the war tactics by Sherman crossed the line for many in the South. Hampton hoped, “that every old man and boy in my country who can fire a gun would shoot down,” Sherman’s soldiers, like a wild beast because of their actions.  The main photo is of General Wade Hampton.

The War of Rebellion: A Compilation of the Official Records of the Union and Confederate Armies; Series I, Vol. XLVII, Part II (Washington D.C.: Government Printing Office, 1895), 596-597.

GENERAL: Your communication of the 24th inst. reached me to-day. In it you state that it has been officially reported that your foraging parties were "murdered" after capture, and you go on to say that you had "ordered a similar number of prisoners in our hands to be disposed of in like manner. That is to say, you have ordered a number of Confederate soldiers to be "murdered."

You characterize your order in proper terms, for the public voice even in your own country, where it seldom dares to express itself in vindication of truth, honor or justice, will surely agree with you in pronouncing you guilty of murder, if your order is carried out.

Before dismissing this portion of your letter, I beg to assure you that for every soldier of mine "murdered" by you, I shall have executed at once two of yours, giving. In all cases, preference to any officers who may be in my hands.

In reference to the statement you make regarding the death of your foragers. I have only to say that I know nothing of it; that no orders given by me authorize the killing of prisoners after capture, and that I do not believe that my men killed any of yours except under circumstances in which it was perfectly legitimate and proper they should kill them.

It is a part of the system of thieves whom you designate as foragers, to fire the dwellings of those citizens whom they have robbed.

To check this inhuman system which is justly execrated by every civilized nation, I have directed my men to shoot down all of your men who are caught burning houses. This order shall remain in force as long as you disgrace the profession of arms by allowing your men to destroy private dwellings.

You say that I cannot, of course, question your right to forage on the country. "It is a right as old as history." I do not. Sir, question this right. But there is a right older even than this, and one more inalienable -- the right that every man has to defend his borne, and to protect those that are dependent upon him. And from my heart I wish that every old man and boy in my country who can fire a gun, would shoot down, as he would a wild beast, the men who are desolating their land, burning their houses and insulting their women.

You are particular in defining and claiming "war rights." May I ask if you enumerate among them the right to fire upon a defenceless city, without notice; to burn that city to the ground after it had been surrendered by the authorities, who claimed, though in vain, that protection which is always accorded in civilized warfare to non-combatants; to fire the dwelling-houses of citizens, after robbing them, and to perpetrate even darker crimes than these -- crimes too black to be mentioned?

You have permitted, if you have not ordered, the commission of these offences against humanity and the rules of war. You fired into the city of Columbia without a word of warning, After its surrender by the Mayor, who demanded protection of private property, you laid the whole city in ashes, leaving amid its ruins thousands of old men and helpless women and children, who are likely to perish of starvation and exposure. Your line of march can be traced by the lurid light of burning houses, and in more than one household there is an agony far more bitter than that of death.

The Indian scalped his victim, regardless of sex or age, but, with all his barbarity, he always respected the persons of his female captives. Your soldiers, more savage than the Indian, insult those whose natural protectors are absent.

In conclusion, I have only to request that whenever you have any of my men "disposed of," or "murdered," for the terms appear to be synonymous with you, you will let me hear of it, in order that I may know what action to take in the matter In the meantime I shall hold fifty-six of your men as hostages for those whom you have ordered to be executed. I am yours. &c., 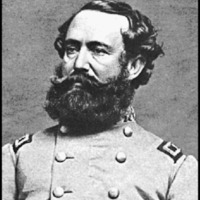 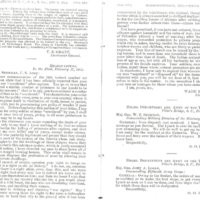