Nat Turner (1800-1831), a Virginia slave, who was important in creating mass fear of slave insurrections throughout North Carolina by leading a large slave rebellion twenty miles near the North Carolina boarder, that resulted in the arrest and murder of numerous suspected slaves and changed many slave codes in North Carolina.

Nat Turner (1800-1831) was a slave from Southampton, Virginia, which is located twenty miles from the North Carolina boarder. His slave rebellion on August 21st, 1831, created mass fear and rumors of slave insurrections throughout North Carolina, which resulted in the arrest and murder of numerous suspected slaves and changed many slave codes in North Carolina. Turner was born into slavery in 1800, and was sold to several masters throughout his life. (Wood 2009) His slave experience was common one of limited freedom, and hard labor. Turnerâ€™s intelligence, his ability to read and write set him apart from most slaves. (Aptheker 2006, 35) He was deeply devoted to reading the Bible, and carried strong religious convictions. These convictions led Turner to desire to fight against the oppression and evil system of slavery. Turner was a man that looked for signs in nature by God that would lead him to carry out his divine election to â€œbattle against evil.â€ On August 22, 1831, Turner along with others began attacking all white people connected to the institution of slavery. (Wood 2009) As they moved from plantation to plantation almost 50 other slaves joined their cause. The rebellion ended when an armed militia of 3,000 white men caused the rebellious slaves to flee. Turner hid in the woods for over two months before his capture. He received the death penalty along with 54 other slaves, but Turnerâ€™s body was also to be skinned. Turnerâ€™s rebellion would leave 55 whites connected to slavery dead, but created massive fear throughout the country. (Wood 2009) This fear of slave insurrections spread quickly as false rumors of large rebellions spread throughout the state. Hundreds of slaves were falsely accused by white mobs, which resulted in the death of many slaves. Turnerâ€™s rebellion caused new legislation to brought about in North Carolina, which restricted all African-Americans throughout the state. 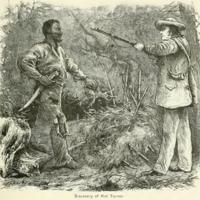