General Burnside was a United State Military Academy graduate who would fight in the Mexican- American War, followed by the Civil War. He would become responsible for landing the North Carolina Expeditionary forces within Confederate lines to establish eastern North Carolina as a stronghold for unionist and the Union military.

General Ambrose E. Burnside was born on May 23, 1824. Burnside began his military career upon graduation from the United States Military in 1847. He would become a second lieutenant during the Mexican-American War and would be put on garrison duty in Mexico City. After, the War, Burnside would briefly be stationed in the southwest until 1853, but was appointed major general of the Rhode Island militia, receiving a nomination to Congress. At the onset of the American Civil War, Burnside would be one of the first to reach Washington, along with the 1st Rhode Island Infantry. Burnside led at the battle of First Manassas and was appointed brigadier general of volunteers on August 6, 1861. As of September 1861, Burnside was given command over what was known as the North Carolina Expeditionary Forces, which launched and attack and occupied the North Carolina coast. Burnside had successfully created a legitimate foothold within the confederacy and was promoted to major general for his success. This successful occupation on North Carolina would last from 1862, until the end of the war. Burnside would eventually move on and be reassigned to a new post, taking control over the IX and I Corps during the battle of Antietam. His orders during the battle would lead to indecisiveness which provided great difficulties in capturing what became known as â€œBurnsideâ€™s Bridge.â€ By 1863, Burnside had been given command of the Department of Ohio. In autumn of this year, Burnside would successfully command his troops against Confederate General James L. Longstreet, in which he was able to out maneuver Longstreet. During the â€œBattle of the Crater,â€ Burnside failed to take advantage of the exposed hole in the Confederate lines, resulting in heavy casualties of his men. After this failure, Burnside would resign his commission on April 15, 1865. After the Civil War, Ambrose Burnside would briefly serve as a Senator from the state of Rhode Island. 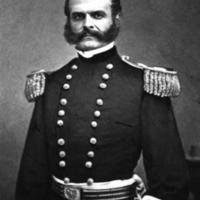