The article "To the Polls! To the Polls!!" was published in Governor Zebulon Vance's political newspaper, the Weekly Conservative of Raleigh, North Carolina as one of many pieces of propaganda designed to influence people to vote for him in the gubernatorial elections of 1864. In the beginning of this article, Vance presented himself as a soldier, a patriot, and the best friend of a soldier and their families. Here, Vance is referring to his brief time spent serving in the Confederate army shortly before his first election campaign in 1862. Even though his time in the Confederate service was brief, Vance claimed that his time in the service taught him the experiances to relate to the problems facing the soldiers in the field.
While Governor Vance was pushing in this campaign to maintain the long and bloody Civil War, the sense of honor which permiates the second paragraph urged North Carolinians to support him on the election day. As can be depicted from this extract, the honor which Vance is supporting relates very closely to the "do not let their deaths be in vein" montra.
On the other hand, as the article is wrapping up, the author warns people away from voting for Vance's opponent W. W. Holden because then the soldiers would fear that they were not supported at home and the war morale would be destroyed. With this, Vance charged every man with the responsibility to vote against Holden in order to encourage the defenders of their country.

FOR GOVERNOR :
Z. B. VANCE
OF BUNCOMBE

The Conservative Ticket for Wake County !

We appeal to every true and loyal man in the State -- and we are happy to believe there are few who are not true and loyal -- to go to the polls and vote for Zebulon B. Vance, the soldier, the patriot, the statesman, the friend of civil liberty, the friend of law and order, the soldiers' best friend and the special friend of their families at home.
Remember that the soldiers in the army have endorsed Gov. Vance. They have declared in thunder tones that they are willing to trust Z. B. Vance again. They stand between you and the common enemy -- they have fought and bled for the independence and freedom we all have so much at heart -- they have undergone privations and sufferings for us and our families that we who are at home have no conception of -- they are still baring their breasts to the foe and bid defiance to his mercenary legions. Does not very true heart in North Carolina overflow with gratitude to the brave soldier for what they have done and for what they are still willing to underg[o] for the sake of peace and independence?
Can we deny any request these brave and heroic men may ask at our hands? Surely, surely not -- Then they have made a request -- an almost unanimous request -- and that request is, that the people of the State on next Thursday will ratify and confirm the choice, they, the soldier, have made for Governor. Grant this request, and you encourage the soldiers; you inspire them with the belief that the people at home are willing to do their duty also. But vote for W. W. Holden, and you say to the solders that you are better judges of the duty imposed by patriotism than they are. Vote for W. W. Holden, and you will make the soldiers believe that there is something wrong at home, and they will become discouraged and disbeartened. This should never be. You should do everything to encourage these brave defenders of your country and nothing will at this time give them so much encouragement as your voting for our most excellent and model Governor, Zebulon B. Vance. Let every man, then, go to the polls, and swell up such a majority as was never known before in the annals of North Carolina elections. 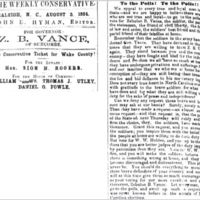