George Nichols, a lieutenant-colonel under Major-General William Sherman in the Union Army, wrote of a group of men called the â€œbummers,â€ in Fayetteville on March 12, 1865. Confederate citizens often feared the bummers, but when Nichols wrote of them, he discussed them in a much more favorable light. Nichols admitted that bummers might be a little out of control, as they often disappeared without command for days. When gone, they moved beyond the foraging of food, and committed deeds of violence, against Confederate citizens on the home front. Although bummers stretched their actions to the limit, possibly beyond, Nichols admitted, â€œthese wanderers from the ranks are often of great benefit to the army.â€ Many in the Union Army felt similar to Nichols, realized that these men carried out questionable activities, but they were vital for the war effort on the march

George Nichols, The Story of the Great March: From the Diary of a Staff Officer, ed. Maurice Filler (Williamstown, Massachusetts: Corner House Publishers, 1984), 240-244.

If it be asked what a bummer is, the reply is easy. He is a raider on his own account-a man who temporarily deserts his place in the ranks while the army is on the march, and starts upon an independent foraging expedition. Sometimes he is absent for a few days only, occasionally he disappears for weeks together. An officer whose duty requires him to pass from one column to another, or private soldier sent out upon a scout in the forest or on the flank of the army, not unfrequently stumbles suddenly upon an encampment of bummers in the woods, or finds a party of them at a house by the wayside. This party bears all the outward aspect of an authorized and perfectly legitimate foraging party: the capacious wagons are there, with caparisoned mules; blooded horses stand tethered within reach of their apparent owners; the camp-fires burn brightly; a sumptuous meal is ready . . . . (240)

Aside from the freedom from control which gives bad men opportunities to commit wanton deeds of violence, these wanderers from the ranks are often of great benefit to the army. Better flankers can not be found. Spreading out from the marching column, they are the first to scent danger, and the last to leave the field, unless actually forced back. They understand the art of squad fighting to perfection. Parties of them, without officers, will join together to resist an onset of Rebel cavalry, or to make an attack upon the enemy, and they are almost always victors in a skirmish. (243) 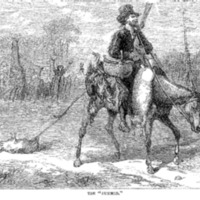