Francis Preston Blair, Jr. served as a general with Union Army as General William Sherman marched his men through the South. Special Orders No. 63 came as Blair and his men settled just outside the city of Fayetteville, on March 10, 1865. The order reiterated that Blair and other leaders under Sherman’s command expected North Carolina to be much more peaceful than South Carolina, which led to Blair to tell his men to be nicer to North Carolinians. While Blair wanted his men to be nicer to the state of North Carolina, his men still had a job to do in the state. To carry out their job, to destroy North Carolina’s ability and will to fight, the army needed food, which had to be foraged from local citizens. While the men were to be more lenient on the citizens, to not forage from locals was not an option, as foraging was a necessary war tactic to provide for Sherman and his army. But Confederate citizens disagreed. The above photo is of Blair (center) surrounded by others under his command.

I. Division commanders will cause a sufficient number of good cattle to be collected in the country to have fifteen days' supply of beef continually on hand.

II. The State of North Carolina is to a great extent loyal, and as such, a marked difference should be made in the manner in which we treat the people and the manner in which those of South Carolina were treated. Nothing should be taken from them except what is absolutely necessary for the use of the army, and to this end the following regulations for foraging are made and will be strictly enforced: A foraging party for each division will be organized, to consist of sixty men and the proper number of commissioned officers. Reliable officers will be selected for these parties, officers who can and will control their men, and they will be held strictly responsible for the acts of the men. The men will not be permitted to enter dwelling houses under any circumstances. They must be kept together and at all times under the eye of a commissioned officer. if it is necessary to detach a portion of the party they will be sent under charge of a commissioned officer. These parties will take nothing but what is necessary-that is, animals, food for the command, and forage for the stock. Each division and brigade headquarters, battery, and train will be allowed a sufficient number of foragers, to be regulated by division commanders, and placed in charge of a reliable non-commissioned officer, who will keep them together and subject them to the rules prescribed for the division party. Each of these foragers will be provided with a pass. Division commanders will cause all animals to be taken from persons not authorized to be mounted. All unserviceable animals will be shot, and after filling up the batteries and train the rest will be turned over to Lieutenant Colonel E. M. Joel, chief quartermaster Seventeenth Army Corps, to be disposed of as the major-general commanding may direct. All led horses must be kept in their placed in the column. Provost-marshals of divisions will patrol their line of march with a detachment of mounted men, and they will arrest and dismounted all mounted men found way from the line of march, unless they are regularly detailed foragers with their officers and complying with this order. Where division commanders deem it necessary they may send a detachment of infantry under charge of a good officer to forage on the flank. They will not be permitted to go in advance of the colun or to a greater distance thena five miles to the flank. These men will not be allowed, under any circumstances, to seaprate or to enter houses, and the officer in charge will be held to strict accountability for their acts. Provost-marshals will arest all men other [than] these, found away from their commands. All officers are charged with the execution of this order and will arrest any men found violating it. The inspector-general's department will see that none but persons authorized are mounted. Division commanders may retain such number of unserviceable animals as they may wish to mount their foot-sore men on. 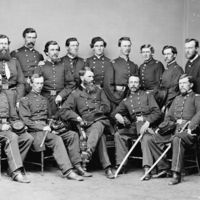