This document is the Civil War Service Record for Adams Davis, who was a former slave in Beaufort, North Carolina and went on to enlist in the 35th United States Colored Troops. The 35th USCT, which evolved from the First North Carolina Volunteers, was the first Union colored regiment from North Carolina and was made up primarily from former slaves. This document recorded the soldierâ€™s age, height, complexion, eye color, hair color, birth place, and former occupation. It also recorded when, where, and by whom they were enlisted. At the bottom the service record is a section entitled â€œRemarksâ€ that would include any details about the soldierâ€™s service that the writer deemed important enough to include. Most of the time, this section would include battles fought, whether or not the soldier had been wounded or killed, or other details about discharge or other relevant matters. In this document, Adams Davis was listed with having a â€œblackâ€ complexion and with a former occupation of â€œfarmer,â€ which is what they frequently put down if the man was a former slave. In the â€œRemarksâ€ section it is recorded that Adams Davis went missing at the Battle of Olustee which was a major battle fought by the 35th USCT in the Union attempt to seize Florida. 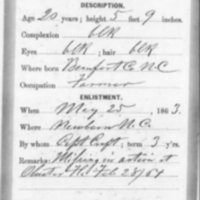