This is the first response that Confederate Governor Zebulon B. Vance sent to the Union Military Governor Edward Stanly regarding Stanly's call for peace negotiations. The overwhelming message that Vance delivers to Stanly focuses on his inability to conduct any sort of peace negotiations on behalf of the Confederate Government. Furthermore, Vance enlightens Stanly of the fact that North Carolina and her people had completely dissolved their ties with the Union and therefore would fight for it "with the last dollar & the last drop of blood." Vance argues that North Carolina's honor is bound to the Confederacy and because of this bond, her people would never abandon their brothers in order to gain the Union's vision of reunification.

It should, however, be noted that North Carolina was the leading Confederate state in the number of combat deserters; so with this in mind, Stanly's remarks were not necessarily absolutely incorrect.

Your communication of the 21st. inst. has been recd, to which I proceed to reply-
It is "incompatible with my views of duty" to grant you a personal interview for the purposes mentioned for the following reasons
First. If the measures which you propose to discuss relate to a general peace between the Confederate States, and the United States, then it is needless for me to inform you that I have not the power to confer with you authoritatively. By the Constitution of the Confederate States to which the State of North Carolina has unanimously acceded, the power to make war & conclude peace has been delegated to the President & Senate- To their hands I am content to leave it.
Secondly--If your proposition (as it evidently does) has relation to a separate peace between the State of North Carolina & the United States, then it is still more inadmissible. North Carolina with great unanimity dissolved her connection with the old government and entered into a solemn compact with the new government of the Confederate States. Her obligations in this new relation are obvious & her honor is pledged to redeem all these obligations faithfully with the last dollar & the last drop of blood, for the general good.
Your proposition is based upon the supposition that there is baseness in North Carolina sufficient to induce her people to abandon their confederates & leave them to suffer alone all the horrors of this unnatural war, for the sake fo securing terms for themselves -- a mistake which I could scarcely have supposed any one so well acquainted with the character of our people as yourself could have committed.
North Carolina having committed the questions of war & peace to the authorities of the Confederate Government has now no cause to distrust their ability or their patriotism, or to withhold that generous support to their measures which has hus far characterized her.
The same remarks are applicable in reference to the negotiating for the exchange of political prisoners of whom North Carolina has none in custody.
Your proposition that I should send Commissioners to hold an interview with you is equally beyond my province to treat with you in regard to doing anything to "alleviate the inevitable sufferings that attend the war," and assuring you that any proposition you may feel authorized to make for that humane purpose will be promptly forwarded to the proper authorities if entrusted to me, 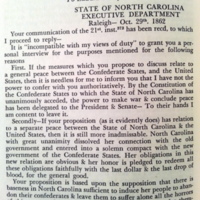 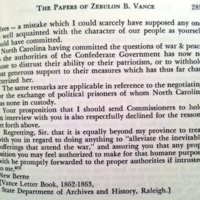