This letter from the Confederate North Carolina Governor, Zebulon Baird Vance, to the Confederate President, Jefferson Davis, briefly outlined one of the pressing issues that the North Carolina people were protesting in the summer of 1863. It is apparent throughout this epistle that Vance is attempting to politely inform President Davis of the frustrations that he holds in the fact that Davis had appointed a Virginian to be the Colonel in charge of collecting the tax in kind for the state. It is important to understand that the tax-in-kind laws were creating a great amount of distaste for the Confederacy within the state. Vance believed that some of the protest would be regulated if the person collecting the tax were a native, especially if they were someone who was well known.

Dear Sir
A great deal of harm has been done and much dissatisfaction excited by the appointment of citizens of other states to offices and positions her that should of right be filled by our own people
The last appointment by the Q. Master General, of a Col. Bradford of Norfolk Va to the Chief Collectorship of the tax in kind for this State, has given almost universal offence, and I may be excused for, very justly. No objection that I am aware of is made to him except that he is a citizen of another State, and we all feel that the Offices so purely local as this, we have a right to demand that they be bestowed upon our own people.
I feel it my duty, out of respect to my State and people as well as to remove any cause so far as may be, for dissatisfaction, to bring this matter to your attention and ask that you make a different appointment 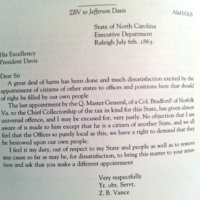