In this correspondence to Edwards Jones Hale, who was the editor of the Fayetteville Observer and a close friend of Governor Zebulon Baird Vance, Vance related the outcome of his visit to the Confederate President Jefferson Davis in Richmond. Vance claimed that he spoke plainly to the President about the frustrations which he first brought to the President's attention in his July 6th letter, which focused on the appointment of a Virginian to the position of Chief Collectorship of the tax in kind for North Carolina. To this issue, Vance stated, the President had given Governor Vance a carte blanche, or a blank check of power to revise and potentially remove any appointments which were objectionable to Vance or the North Carolina people. These powers would undoubtedly restore confidence of North Carolinians in their State and Confederate government.

Following the address of his victory in Richmond, Vance turned his attention back to the prevailing issues in North Carolina. William Woods Holden, Governor Vance's political opponent in the upcoming gubernatorial election, was clearly becoming a problem for the sovereignty of the Confederacy in the state as he was leading peace rallies to end the exhaustive civil war in favor of rejoining the Union. According to Vance's writing, Holden was willing to surrender to to the will of the Union and even submit to the punishment of his old friends. Finally, Vance declared in this document that he would campaign against his old friend as he persuaded E. J. Hale to “pitch into them – Cry aloud and spare not – My life, popularity, and everything shall go into this contest!”

Then, on a final note, Vance included that this letter would be confidential. This one word is very influential in understanding the intent of this correspondence. Primarily, the fact that this information would be held confidential meant that the opinions Vance wrote in regard to his feelings on Holden were more than likely genuine, although they were also most definitely influenced by his recent visit to Confederate nationalists in Richmond. Furthermore, Hale would not be able to quote Vance’s words on his trip to Richmond or his opinions on Holden, which could have been perceived as propaganda; instead this letter directed Hale to propagate a sense of confidence in Vance’s relations with the Confederate Executive branch while orchestrating a preliminary attack on Holden.

I returned from Richmond on Saturday--was much gratified with my visit indeed--I plainly told the President of the cause of his [illegible] popularity in this State and the injustice done us by his appointments and gave him a fair and unvarnished statement of affairs here--He promised to remove all objectionable [men] and almost gave me a carte blanche for the redress of grievances here—I trust things will be better now that we are understood at Richmond.
I believe however the split with Holden is decreed of the gods--I have made up my mind to it and am prepared for it any day--tho' I dont intend to "precipitate" it. He is infatuat[torn] concerted and determine[d] [burned] his course th[at] [torn] war should [ensue]. He is for submission, reconstruction or any thing else that will put him back under Lincoln & stop the war--and I might add--punish his [old] friends & [co labororers] the Secessionists--
Pitch into them--Cry aloud and spare not--My life popularity and everything shall go into this contest.

Yours most truly
Z. B. Vance

1. The letter has been torn, burned, and faded by water. 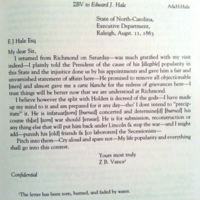