The editor of the North Carolina Standard, a Democratic paper, writes a short article fighting against secession. The author discusses the possible ramifications of seceding and causing a Civil War. The biggest problem for the South would be finding support from other countries, because the southern states were largely the only area in the world that still practiced slavery. If the South started a Civil War to protect slavery, which was not yet threatened directly, it would cause the war to be fought over it, leading directly to it becoming abolished.

If the difficulties between the North and South should not be settled during the next six months, war will be the result. There will be three or four Confederacies. It will be impossible for the Northwestern and Gulf States to avoid war,â€”the navigation of the Mississippi will lead to it. California and Oregon will set up for themselves. The isthmus route to California may be disputed and obstructed. Some of the Northern States will seek an alliance with the Canadas, and this will lead to intervention by Great Britain. England, France, and Spain will become interested and entangled in American affairs. The flags of the new Confederacies will be insulted on the high seas, and privateers will prey on their commerce. War, or impending war, or the state of alarm in which the country now is, will arrest industry, check commerce, and impair confidence between man and man. If war once breaks out it will rage in the interior, on our seacoasts, on the high seas, and on our frontiers. One section will let loose the Indians on another section. Twenty millions of Northern people will at once become our enemies.â€”They will war upon us along a line of three thousand miles from the Atlantic to the Pacific. One section will call in foreign troops against another section. One Confederacy will humble itself before the powers of Europe to get better commercial terms than the other Confederacies. Meanwhile war will rage. Negro property will cease to be valuable, because the products of slave labor, and of all other labor, will be in a great degree cut off from the markets of the world. The negroes will know, too, that the war is waged on their account. They will become restless and turbulent. Heavy taxes will result from these wars. These taxes must be paid mainly out of slave labor. Strong governments will be established, and will bear heavily on the masses. The masses will at length rise up and destroy every thing in their way. State bonds will be repudiated. Banks will break. Widows and orphans will be reduced to beggary. The sword will wave everywhere paramount to all law. The whole world outside the slaveholding States, with slight exceptions, is opposed to slavery; and the whole world, with slave labor thus rendered insecure and comparatively valueless, will take sides with the North against us. The end will beâ€”Abolition! There are other considerations touching slavery which we shall not refer to here,â€”every intelligent mind will at once understand us, and will weigh those considerations for itself.

It is criminal to say there is â€œno hope for the Union.â€ If five hundred of the public men of the two sections could be transported, or confined in dungeons for six months, the Union would be restored and reconstructed during that period, and it would be more glorious and prosperous than the one now threatened with destruction. The disunionist per se is either a mad man or a bad man. He who prefers disunion to Union, and who labors to provoke and aggravate the two sections against each other, is an enemy to his race. He who is for discord instead of concord, for war instead of peace, for disunion for disunionâ€™s sake, is guilty of a crime more stupendous than any which has been committed since Cain slew his brother. 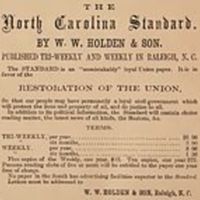