The editor of the North Carolina Standard, a Democratic paper, was critical of both the Union's actions as well as the Confederacy's actions during the beginnings of the Civil War. The author called for the Border States to unite and act against both governments to preserve peace, and if that was not the answer then military force would be used. The author argued that if the Border States united they could field a big enough army to not only defend themselves but also beat both armies.

The proclamation of Abraham Lincoln, which we publish to-day, has completed the sectionalization of the country. The two extremes are now arrayed against each other with warlike purposes, and the only hope for peace is in the border States. They may interpose and stay the hand of brother uplifted against brother.

We shall not discuss the past. We have no regrets to express and nothing to retract. We glory in our course as a Constitutional Union man. The Union men are, at least, “guiltless of their country’s blood.” They have labored long and faithfully, under opprobrium and insults, to save the government and the Union, and at the same time their own native land. But revolution and war are now upon us. The time for “watching and waiting” has gone by—we must now UNITE and ACT. The Union cannot be maintained by force. Men cannot be whipped into freedom. Freemen cannot be compelled to send members of Congress to Washington. The proclamation of Lincoln is a gross usurpation. He has broken the Constitution. He has assumed and is now exercising undelegated power. He has deceived, and would now ruin his country. The Confederate States have grievously erred,—they fired the first gun at Charleston,—they provoked the war; admit all this, and still there is no justification for an attempt on the part of Mr. Lincoln to involve the whole country in war and bloodshed.—He looks to “devastation.” That is war. He says it shall be as light as possible. Unchain the tornado and then bid it become a zephyr!—command Niagara to freeze as it falls! Civil war is the worst of all wars. It is worse than “devastation”—it is spoliation, anarchy, arson, murder, rape, annihilation!

We have read the late Northern papers carefully and sadly. The Northern people appear to be uniting by large majorities against us. The attack on Fort Sumter aroused and banded them—the proclamation of the President fired and cemented them in one common purpose, and that purpose is war to the knife. We cannot become parties to the subjugation of our Southern brethren. The federal government cannot be maintained by force applied to sovereign States. Local combinations and insurrections may be put down by force, and should be; but to attempt to drive and subdue sovereign States by armies is to exercise unjust, undelegated, arbitrary power. The people of North Carolina would not call for this, in any event, towards Massachusetts or Maine; and they will not submit to it when attempted towards the Confederate States. We must unite and command the peace, if possible; if we fail in that, we must fight. This is the duty of the border States. They will prove equal to the crisis. They can muster five hundred thousand fighting men. They will take Washington City, if necessary, and hold it; and they will continue the conflict, if it be forced upon them, until the present federal government is demolished and a new one established on its ruins. 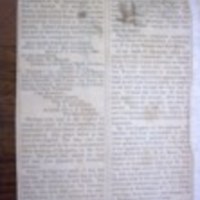