The Scare on the Road, The Swamp Outlaw by Alfred Townshed, 1872

The Scare on the Road, The Swamp Outlaw by Alfred Townshed, 1872

In this chapter from the novel â€œThe Swamp Outlawâ€, we are shown the mindset of two of the people who lived in Robeson County during the time of Henry Berryâ€™s activities. In the first account, the witness discusses a fear of being hunted by the outlaw in his own dream, while the other discusses how democratic papers accuse the outlaw as being the â€œcoloredâ€ answer to the Ku Klux Klan. However, what is also important to note is the retort given to this claim, and the opinion of the outlaw by the democrats who are upset that they could not stop the outlaw outright.

THE SCARE ON THE ROAD.

An instance of the deep sense of apprehension created by these bandits in all southeastern Carolina is afforded by a dream which Colonel W. H. Barnard, editor of the Wilmington Star, related to me. The Colonel's paper is eighty miles from the scene of outlawry: "I dreamed the other nightâ€ said he, â€œthat I was riding up the Rutherford Railroad, and came to Moss Neck station, where the outlaws frequently appear. I thought a yellow fellow, Indian looking, came to the car door and said, â€œEverybody can pass but Barnard! I want him!â€ This was Henry Berry
Lowery. Then I dreamed they took me into some kind of torture place, and poked guns at me and tantalized me."

The newspapers were, however, making political capital out of the Lowery gang, instead of calling upon an honorable and united State sentiment to suppress the scandal. The democratic papers cried, "Black Ku Klux!" and the republican papers retorted by asking where was the valor of the white Ku Klux, who could flog a thousand peaceful men, but dared not meet five outlaws ill arms.

"The democrats," said one Robeson county man, in my room, "as soon as they upset the republicans in Robeson county started to annihilate Scuffletown and its vote by terror. They have been beaten in it. That chap Lowery has made them a laughing stock. He ought to be killed, but they skulk out of his reach." 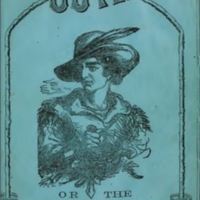