This article was printed in the Wilmington Herald of the Union, on March 15, 1865, just a few days after Union General William Sherman occupied the city of Fayetteville, North Carolina. The Herald of the Union was a pro-Union newspaper that was established after the fall of Fort Fisher and the city Wilmington, to Union forces, in January of 1865. The articled demonstrated how Union sources, like newspapers, perceived the hard war actions of Sherman and his men as legitimate and a successful war policy. The newspaper reflected on the march into Fayetteville as another successful military campaign, in which all had reached safely. The words used to describe Sherman and his armies were typical of language used when one was fighting in battle. Particularly, in the paper, Sherman was described as a “distinguished General.” Many in the South disagreed with the “successful” tactics of war taken by Sherman, as they were illegitimate tactics of war to those in the South. While pro-Union sources bragged of Sherman’s accomplishments, those in the South, like North Carolina, filled with animosity because of the tactics which led to resistance by some.

Wilmington Herald of the Union

NO ENEMY NEAR HIM.

ANOTHER GRAND AND SUCCESSFUL MARCH THROUGH THE RBEL COUNTRY.

Couriers from General Sherman reached this city this morning, bringing the gratifying tidings of the perfect safety and success of the national army of that distinguished General.

The couriers left Gen. Sherman on Thursday morning, at the crossing of the Lumber River, on the main road from Laurinburg to Fayetteville.  He was then advancing, and would probably enter Fayetteville on Friday evening.

There was no enemy in his vicinity except a company of scouts in his front, and Butler’s brigade of cavalry handing on his rear.

He had had no fighting of any account since leaving Columbia.

At Cheraw, on Saturday last, he had a little brush with some rebel cavalry, but drove them out of the town very easily, capturing seventeen pieces of artillery.  Four more guns were captures next day on the opposite side of the river,

Sherman has sworn in and paroled about seven hundred militiamen on his march.  He also has a number of regulars with him as prisoners.

He has found an abundance of all manner of provisions on his route, render it necessary to issue no rations except of coffee and sugar.

The march of General Sherman from Savannah to Fayetteville, has been a continued success throughout. . . 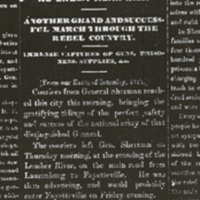 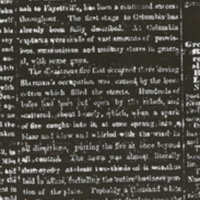