The North Carolina Argus, published from Wadesboro, printed an account of Union General William Sherman and his men, as they occupied the city of Fayetteville. The Argus was edited by John W. Cameron, relative of elite plantation owners the Paul Cameron family. The Cameron families owned more than 1000 slaves at the outbreak of the Civil War and were staunch Confederate supporters. The account provided did exaggerate some details, but delivered vivid detail of the actions by the Union Army in Fayetteville. The article demonstrated the willingness of Confederate citizens in North Carolina to work together, and aid those in Fayetteville that faced starvation. The actions by Sherman’s bummers, as shown in the article, took away items that those in Fayetteville needed to live, and crossed the boundaries of war, for many North Carolinians.

From the Raleigh Conservative.

We have at length definite and reliable information that the Yankees have evacuated Fayetteville. “There are none of them left on the west side of the Cape Fear,” says a recent letter we have seen from a gentleman, in a position to know and who is in every way reliable.

We have the most deplorable accounts of the outrages and plundering of the Yankees while there, and of the wretched state of destitution, in which the inhabitants of that gallant but devoted city, has been left by the vandals. The citizens we learn, were not only stripped of all their provisions but robbed of their money and valuables with which to purchase the means to prevent starvation, after Sherman’s hordes left the city. Their condition calls loudly for the aid of all those who have anything to spare, and who have been fortunate enough to escape so sad a calamity as has fallen to their lot.

We have been permitted to publish the following letter, give a more definite account of their burnings, there than we have before met with:

Dear Sir: The train from Little river arrived this morning. The following may be regarded as a summary of the news from Fayetteville, viz:

John Waddell was killed on his plantation about four miles east of Fayetteville. None of the citizens of Fayetteville were killed. John P. McLean, W.T. Horne and Major Hawly were all hung to extort from them where their valuables were hid, but were takedown uninjured. It is reported that about 400 negros and whites were drowned in Cape Fear River, endeavoring to escape with the Yankees either from the sinking of a flat or the Yankee officers cutting off the pontoons.

Private residence, after being plundered, were guarded to “protect” them. 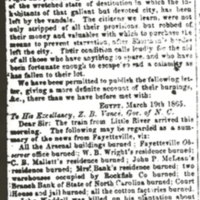