Justice Thomas Ruffin's first draft of his controversial decision in State v. Mann. Ruffin was a slaveowning North Carolinian that served on the North Carolina Supreme Court throughout the middle of the Nineteenth Century. His decision in State v. Mann claimed that, "The power of the master must be absolute to render the submission of a slave perfect." This first draft shows how his logic evolved from the first draft to the third and final draft that was published as the final decision. In his first draft he refers to slavery "in its present form". This gives indication that he thinks that it may change over time. This sentence gets changed to "it is useless to complain of certain things that are inherent in our political state".

This is one of those cases which a Court will always regret being brought into judgement--One in which principles of policy urge the Judge to a decision in discord wiht the feelings of the man. But intil the condition of our population be much changed or it shall seem fit to the Legislature to alter the rule, Courts are obliged, however reluctantly, to recognize the rights of the owner to full dominion over the Slave, as essential to their value as property, to the public peace as dependent upon their subordination and, indeed, while slavery in its present form shall continue to exist, as most effectually securing the general protection and comfor of the slave himself.

The Indictment charges the defendant wiht an assault and battery on Lydia, a slave, the property of Elizabeth Jones. This brings the case within the rule established in the State vs Hall, 2 Hawks, 582. it is not intended to question what is there decided even if it were an open question and had not been decided. But it is not considered open. It is settled by that case. The question, here, is altogether different, upon the evidence. The slave had been hired by the defendant for the year 1828 from E. Jones; and the battery complained of was committed that year. The liability of the defenant to the general owner for a permanent injury, impairing the value of the slave, causied by the ecessive and wanton battery on her or other fault of the hier is a distinct matter of consideration. Ther can be no doubt, that the common doctrine of bailments apply are applicatble to such a study of facts. But  the owner, the hirer, and possessor of a slave, in relation to his rights and duties, is, for the time being, the owner. The case therefore presents the general question, whether the owner of a slave is responsible criminaliter for a bettery upon his own slave or other exercise of authority or force over him, not expressly forbidden by statute. Such a rule has not yet been established. This Court disclaims the power to law down such a rule, or to enfore it, without it first prescribed by the Legislature. The province of interposing between Master and Slave is too delicate, in our State of Society, to be assumed by Courts without the positve injucntion of the lawmaker. this has been assimilated to the other domestice relations; and arguments drawn from the well established principles, wihch confer and restrain the authority of the Parent of the child, the Master over the apprentice and the tutor over the pupul, have pressed on us with zeal and ability. The Court cannot recognize their application. There is no likeness between the Cases. They are separated from each other by an impassable gulf. Without enlarging on the subject, it is enought to say that the difference between them is that, which exists between Freedom and Slavery. A contrast greater than that cannot be imagined. In the one case the subject of governement is one born to equal rights with the governor, his offspring or his ward, young, helpless or inexperienced, the object of affection or benevolence, confided by providence or the law to the harge of another to be trained for usefulness in a station among freemen--the end in view, the happiness of the youth, the means, morals and intellectual instruction which, for the most part, are found to suffice. Force is superadded, only to make the former effectual in cases of intractability. In the other, the end is the profit of the master and the security of his person, and the public safety. And who is the subject of this authority? One who has only intelligence and moral feeling enough to make his service reluctant to enable him ti underand tha the laws, which condemn him to toil for another is unjust, to condemn that injustice and abhor the master who avails himself of it. Can he who has these consciousnesses be prevailed on by moral considerations to perform the functions of servitude? What moral consideration can be presented to him? is it that there is to be no end to the degradation of himself and his descendants--that thro' time, his offspring as well as himself are to have no will of their own and that their exertions are never to yueld fruit but for a master? Surely every passion, good or bad, of the human heart combine to rebuke the folly of him, who advises or expects the Slave to serve his master upon a principle of natural duty. A submissive and entire obedience to the will of the Master can alone be expected to produce that subordination and those efforts of labor exacted from the slave. That submission of will can only follow from the power of the Master over the Body--a power which the Slave must be made sensible is not usurped, but conferred at least by the law of man, if not of God. Restraint, therefore, constant, vigilant, not unfrequently severe and exemplary and painful punishments of the slave is the unwelcome, and the necessary task of the Master. This discipline belongs to the state of slavery. They cannot be disunited without obrogating all the rights of the master and annuling the duties of the slave. It makes to curse of slavery both to the bond and the free portion of our population. But inthe actual condtion of things, there is no remedy. The power of the master must be unconditional and implicit. it is inherent in the relation of Master and Slave.

It is with pride as Citizens and sincere joy as men, that we observe every day improvements in the condition of slaves. The Legislature compels the owner to provide a comfortable subsistence for them, and gives him the same security of life which belongs to a free man: The Courts protect him from the cruelty and abuse of a stranger. Publick opinion, in accordance with the humanity of the laws, demands a mitigation of the rigors of slavery, which has not been without the happiest effects upon the feelings of Masters, who now, generally practice toward the blacks more mildness than formerly and as much indulgence as is consistent with the true interests of both classes and the common safety. 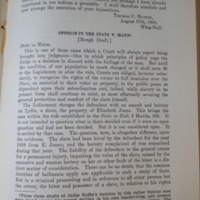