During the campaigns of 1898 and 1900, political cartoonist Norman Jennett created a number of viciously racist depictions of African Americans for inclusion in the Raleigh News and Observer, a newspaper which was sympathetic to the Democratic Party and its white supremacist agenda. In this particular example, North Carolina Congressman George H. White is pictured as an elephant, a symbol of the Republican Party, of which he was a member. Although White is not identified by name, as he was the only African American serving in Congress between 1896 and 1900, the reference to “our only Negro Congressman” would have likely been recognizable to most readers. The Congressman, whose face is somewhat caricatured, is shown contentedly suckling from a jug marked “TERM OF CONGRESS WORTH $5,000 A YEAR.” This suggests that White was only interested in his own financial gain and also ties him to stereotypical representations of African Americans as lazy drunkards. The caption at the bottom suggests that White’s days as a Congressman (and by extension the days of “negro domination”) would soon be over. As White and Josephus Daniels, the editor of the News and Observer, had an intensely antagonistic relationship, it is perhaps no surprise that he was singled out for attention by the paper’s cartoonist. During the campaign of 1900, Daniels repeatedly attacked White for statements he made during a debate over lynching law (he claimed white men were more likely to attack black women than vice versa) and this cartoon represents a more visual attack in a much longer campaign against the Congressman. 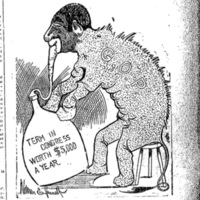